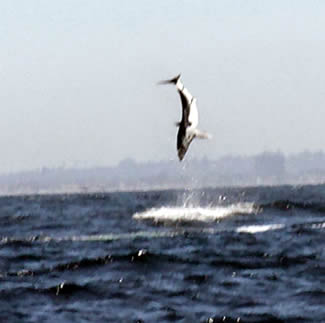 The mako made a series of leaps during the battle, cartwheeling end-over-end. Photo: Randall Bryett 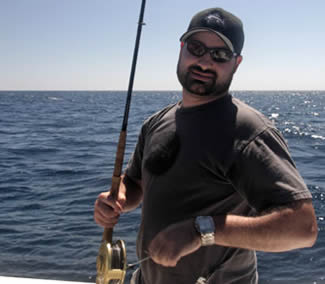 While it may have been the biggest fish ever caught using a fly rod, it won’t count as an official record because Mason didn’t kill the beast.

Mason went looking for sharks with a fly fishing outfit based in San Diego. They attracted the shark to the boat using a bucket of cut up fish bits. The shark’s weight and length were estimated as it swam next to the 24 foot boat.

He had to work hard to get the shark to take the bait. One of the concerns was that the shark should take the bait at such an angle that it didn’t end up in the boat. When the shark finally took the line, it exploded into action.

The events were well photographed, but we are prevented from showing them here as the rights to the photographs have been bought up by various fishing magazines.

By all accounts a mako shark is a pretty serious fish. It can travel up to speeds of 22 miles per hour and in Brendan’s 40 minute fight with the fish, the shark leaped out of the water several times.

Dale Mason, Brendan’s father said that his son is a devoted fisherman.

Brendan has travelled all over the world fly fishing. He’s part of the Angling Exploration Group that produces non-instructional (surf genre) movies about fly fishing.

“That’s what they were targeting, but I don’t think he thought he’d get one that big,” said his father, Dale.

Brendan’s day job is a software developer in Seattle.

To view photographs of the event check out http://www.FieldandStream.com or http://www.RiverandReef.com.

Mako Sharks can attain burst swimming speeds of up to 35 km/h (22 mph) and can leap clear of the water to heights of up to 6 meters (20 feet).