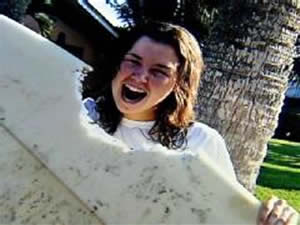 Jessica Riley and her shark-bitten surfboard

FLAGLER BEACH, Florida -- The Florida teenager is now telling her incredible story of the close encounter with the big shark. The huge fish took a giant bite out of her surfboard, but didn't get her.

The near-miss happened just outside the breaking waves on Flagler Beach and the shark was not one of the typical 3- to 4-foot varieties that you see more often. It was big and Jessica Riley looked it right in the eye.

A picture of Jess and her surfboard, taken two hours after she narrowly missed being bitten herself, looks faked, but it wasn't. Instead, a large, half-circle was bit out of her surfboard by a bull shark estimated to be nine and a half feet.

"As soon as I raised [the board] out, this thing just comes up and chomps on it," Jess told Eyewitness News.

She was surfing alone early Sunday morning when she heard a splash nearby.

"The whole, like, Jaws effect, where you see the eyeballs and then they turn white and the teeth they were, like, crooked," Jess explained. "As soon as it bites in I, like, fall in, fall right onto the shark."

Jess struggled to get back to her board and made it to shore, scared but alive.

"Like, I started to kick, just kneed the shark right under its mouth, kind of. And my finger found its eyeball and, like, it went it. And as soon as I realized it was his eyeball, I shoved it in more," she said.

She doesn't think it's simply luck that she's still alive. She has a cross on her board and wore her cross necklace that day, something she never does.

Lifeguards did keep watch on the beach after the attack, but after two hours of watching didn't see anything. They opened the beach as usual Sunday and are not aware of any other sightings of the huge shark.