They're Back: Recent Otter Deaths A Reminder That Great White Sharks Are Patrolling California Waters 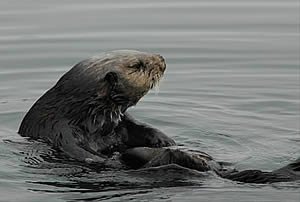 This graph shows the southern sea otter population trend since 1985, based on the annual data collected by the U.S. Geological Survey.

SANTA CRUZ, California -- After a decade of steady recovery, the southern sea otter â a federally listed threatened species â is in decline for the second year in a row, according to the latest population survey by U.S. Geological Survey researchers.

"We have seen a decrease in sea otter numbers throughout most of their range, particularly in those areas where most of their reproduction occurs, while pup counts have dropped to 2003 levels," says Tim Tinker of the USGS Western Ecological Research Center and lead scientist for the annual survey. "A number of human and natural factors may be influencing this trend, and we are working to better understand what those are."

Population estimates are calculated as three-year averages of annual survey results, which compensate for variability in observation conditions and give scientists a more reliable picture of abundance trends. This year's estimate â averaging counts from 2010, 2009 and 2008 â is 2,711 otters. This represents a 3.6 percent drop for the overall population and an 11 percent drop in the number of otter pups, compared to 2009 estimates.

For southern sea otters to be considered for removal from threatened species listing, the overall population estimate would have to exceed 3,090 for three consecutive years. This is the threshold established under the Southern Sea Otter Recovery Plan by the U.S. Fish and Wildlife Service.

Researchers also saw the sea otter's geographic distribution shrink this year, with fewer animals at the northern and southern ends of their range, which is now from Pigeon Point to Gaviota State Park in California.

"Movements and clumping of male otters away from the range edges may partially explain this change," says USGS biologist Brian Hatfield, who organizes the otter survey. "And the low pup count might be linked to heavy storms and reduced kelp cover this past winter, since we also saw a record number of pups and juveniles that got stranded ashore.

As for the overall population decline, all indications point to elevated mortality

Sea otters are active predators that rely on near-shore coastal waters. As a result, they are constantly exposed to many stressors, such as chemicals and pathogens from coastal water pollution, ingestion of toxin-contaminated prey, and reduced food abundance. Chronic exposure to multiple stressors could make otters more susceptible to illness and injury, and lead to a greater chance of death.

"Recovery will clearly depend on our understanding the factors contributing to slow population growth in recent years and the current downturn," said Lilian Carswell, Southern Sea Otter Recovery Coordinator for the U.S. Fish and Wildlife Service. "Research is fundamental to recovery efforts because we need to understand which stressors are most strongly affecting survival rates in order to develop targeted measures to address them."

To help untangle this complex puzzle of stressor effects and interactions, Tinker is leading a study to compare sea otter health between areas with different types and severity of stressors, to find out which area has healthier otters and why.

"Remember, sea otter health can tell us a lot about the health of the coastal waters that humans also enjoy," Tinker says. "So, we're eager to learn more."

The survey was conducted during the month of May from Point San Pedro in San Mateo County down to the Santa Barbara/Ventura County line. The survey has been conducted annually since 1985 and is a cooperative effort of the USGS Western Ecological Research Center; the California Department of Fish and Game's Marine Wildlife Veterinary Care and Research Center; Monterey Bay Aquarium; University of CaliforniaâSanta Cruz; and many experienced and dedicated volunteers. Assistance also comes from staff of the U.S. Fish and Wildlife Service and the Bureau of Ocean Energy Management.