Angler Robert Pearson In The Hunt At FLW Fishing Tournament; 'We Didn't Mess Up Today' 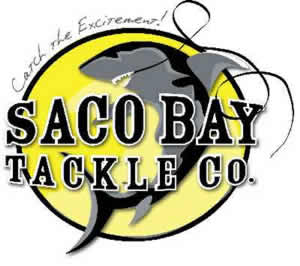 Saco Bay Tackle Company is announcing its sponsorship of the annual DownEast Maine Shark Tournament to be held Friday and Saturday August 28th and 29th and raises money for the Maine United Way.

Pete Mourmouras, owner of the 22-year old tackle store and outfitter, hosts not only the Captain’s Dinner the night before the event for all team captains, but also opens his store early to supply participating boats and spearheads the clean-up at Camp Ellis after the event.

“This is a fantastic event for the fishing community to come together and raise money for a good cause,” says Mourmouras, who has been a sponsor of and competed in the event for years. “Not only do we raise money for the United Way, the event provides a little boost for local businesses as well as benefitting the scientific community.

The University of New England’s Biological Sciences Department and the National Marine Fisheries Service APEX Predator Programs both will have teams on hand collecting data on the fish weighed in at this year’s event. In addition, all proceeds of the event benefit the York County United Way and all sharks processed in the event are donated to local food pantries.

“Of course, for most of the participants, the real prize is the competition itself and the chance to take a bite out of the significant prize money,” says Mourmouras.

Although the purse changes as it is dependent on the number of entry fees taken in, last year’s 1st place team took home close to $5,500 and two Penn International 50 VSW reels on Penn International stand-up rods, high end shark tackle that retails for over $1,000 apiece.

In addition to the standard prizes, tournament organizers are offering a $10,000 prize for a shark that breaks the current size record for blue, probeagle or thresher sharks. Three teams in last year’s tournament came within 5 pounds of breaking the record for blue sharks, including Mourmouras’s own team.

“We’re all fishermen here and get excited for an event like this,” he said. “This tournament is truly a great event for the community!”

For more information on this tournament please contact: Peter Mourmouras at Saco Bay Tackle, (207) 284.4453 or sacobaytackle@maine.rr.com