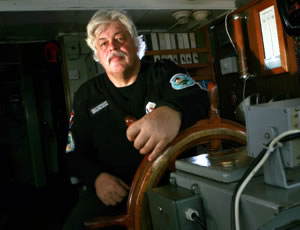 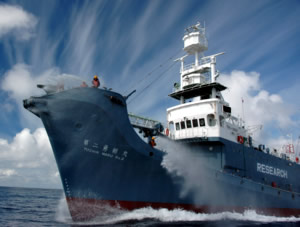 Captain Paul Watson founded his Sea Shepherd Conservation Society in 1977 because he believed his new organization had to go even further to eradicate whaling, poaching, shark finning, habitat destruction and purported ocean law violations than the Greenpeace group he had co-founded.

For several years, Watson’s group of staff and volunteers have engaged in a campaign every winter to find and stop Japanese ships that hunt whales in the name of research, attempting to stop them by any non-violent means necessary. The eclectic group – labeled activists, heroes and/ or eco-pirates – leave port in Melbourne, Australia for a two-month campaign that is dangerous, controversial and has garnered international media attention. Sea Shepherd’s dedicated, international crew have spent their holiday the last several years and risked their lives at the bottom of the Earth to save whales.

During the 2007-2008 campaign, Animal Planet captured the intensity of Sea Shepherd’s mission and the trials and tribulations of the crew in a new seven-part, hour-long weekly series WHALE WARS, premiering Wednesday, October 29 at 10 PM. The series draws attention to this global conservation issue that has caused friction between several nations over the practice of whaling in oceanic territories. This year’s campaign was particularly eventful with multiple engagements, capsizing, possible hostage-taking and alleged shooting, and Animal Planet crews were onboard to document it as it unfolded.

Highlighting both the controversial whaling trade and the tactics that Sea Shepherd and its staff and volunteers use to attempt to cripple it, the series documents the group’s three-month sojourn across the icy Antarctic waters at the far end of the globe. Each week on WHALE WARS, Animal Planet will take viewers on a powerful and adrenaline-fueled adventure and spotlight how the group takes action against alleged illegal whaling operations. The Society’s fight to eradicate Japanese whaling on the high seas – where international laws are interpreted by different countries and organizations in different ways – utilizes some aggressive techniques, including ramming and disabling whaling ships; disrupting whale carcass processing; engaging in physical entanglement; and boarding and dispersing fleets of whaling vessels. For the campaign this season, Sea Shepherd christened its vessel in honor of the iconic conservationist Steve Irwin with the blessing of his wife Terri, both of whom support the organization independent of Animal Planet.

“WHALE WARS is an epic adventure that looks at the consequences of taking a stand on an issue,” said Marjorie Kaplan, president and general manager of Animal Planet. “It’s so important that WHALE WARS calls Animal Planet its home. It’s truly compelling television, and it’s entertainment with a conservation message infused to its core.”

Sea Shepherd’s 2007-2008 campaign – and the story that WHALE WARS tells – was named Operation Migaloo and was replete with many incidents for the international-born crew. Two of the most notable incidents included the capture of two of its crew – Benjamin Potts and Giles Lane – by one of the Japanese ships, and the gunshot inflicted upon Paul Watson, allegedly fired from one of the Japanese crew, according to Sea Shepherd. The Japanese fell nearly 500 whales short of the season’s quota, and according to Sea Shepherd and its standards, the 2007-2008 campaign was very successful. “Whaling has no place in the 21st century,” noted Watson. “Sea Shepherd will not stop until the killing ends.”