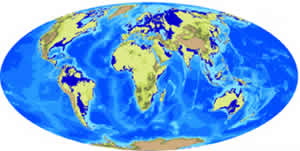 The effect of a 170m sea level rise on today's continents (dark blue), based on combined changes in ocean basin volume and the melting of icesheets 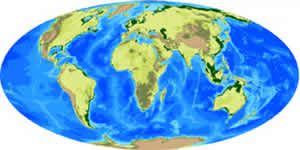 What the world may look like 80 million years from now, with sea levels 120 m lower (exposed land shown in dark green). Images courtesy of R. Dietmar

Analyzing data on ocean crust production, ocean sediment buildup and tectonic plate boundaries to reconstruct ancient ocean basins, R. Dietmar Muller of the University of Sydney and colleagues modeled a late Cretaceous sea level that was 550 feet (276-878 feet) [170 (85 to 270) meters] higher than it is today.

The estimates center around geological changes near New Jersey, where plate movement might have pulled the Jersey coast downward by 340-585 feet (105 to 180 meters) in the past 70 million years. Muller and colleagues says the results "could help reconcile different Cretaceous sea level estimates from the area" as well as improve forecasting for sea level change due to warming climate.

The study suggests that the current rise attibuted to thermal expansion of sea water and melting ice is but a brief interruption of an broader geological trend toward deeper oceans. Overall the authors forecast a sea level decline of 120 meters over the next 80 million years.