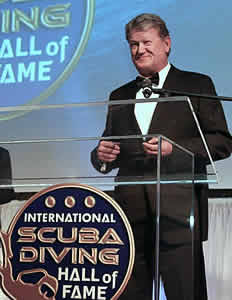 Guy Harvey was inducted into the 2013 International Scuba Diving Hall of Fame.

Dr. Guy Harvey, a renown marine wildlife artist and conservationist, joined an elite group of scuba diving legends this week in Grand Cayman where he was inducted into the sport's hall of fame. The honor came as Dr. Harvey marks his 40th year as a certified diver, much of that time engaged in underwater photography, filming and studying a variety of saltwater wildlife.

Dr. Harvey holds a Ph.D. in Fisheries Biology and has his studio as well as his home in George Town. He will was inducted into the 2013 International Scuba Diving Hall of Fame along with Rolf Schmidt and Petra Roeglin, Sam Davison, Bert Kilbride and Diving Pioneer Paul Bert. Local Cayman honorees include Norbert Scott and Captain Glen Gleason Ebanks.

Founded in 2000 by the Cayman Islands' Ministry of Tourism, The International Scuba Diving Hall of Fame was created to establish a link between the Cayman Islands, a leading pioneer in dive travel and a premiere world destination for divers, and the dedicated enthusiasts who have contributed the most to the sport of Scuba Diving the world over.

About Guy Harvey Guy Harvey is a marine wildlife artist and conservationist who earned a Ph.D. in Fisheries Biology. His depictions of marine life, especially of sportfish such as marlin, are very popular with sport fishermen and have been reproduced in prints, posters, t-shirts, jewelry, clothing, and other consumer items. Harvey is also a very vocal and active advocate for marine conservation, having established the Guy Harvey Research Institute at Nova Southeastern University of Fort Lauderdale, Florida as well as the Guy Harvey Ocean Foundation, an organization that funds marine conservation research and educational initiatives. He is a member of the IGFA Fishing Hall of Fame and a recipient of the International Swimming Hall of Fame Gold Medallion Award. www.guyharvey.com