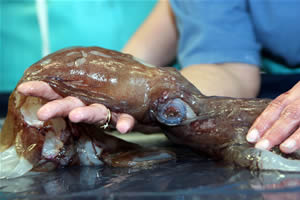 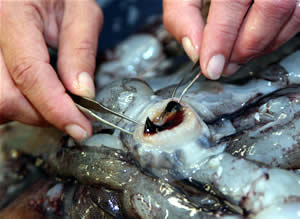 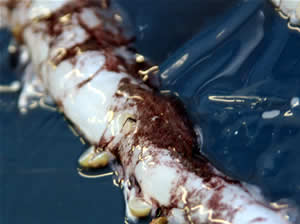 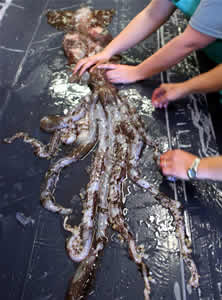 SARASOTA, Florida -- Scientists at Florida's Mote Marine Laboratory are trying to figure out the identity of a large squid found off the Florida Keys by a charter captain last week.

Capt. Clint Moore was fishing in 850 feet of water near the Gulf Stream southwest of Key West Tuesday when he saw a large mass floating at the surface. Moore realized the creature was a squid and took it aboard. At the dock, he estimated the squid to be 13 feet long but realized it was not fully intact.

The animal was taken to Mote Marine Laboratory in Sarasota where Debi Ingrao performed a necropsy on Thursday.

"The tail section was gone; it had no tentacles, so I can't speculate what the overall length was," Ingrao said. "What we have is 6.5 feet long. It weighed 13.2 pounds, but it may have been more than that." Ingrao also realized the squid was something strange to Florida waters.

"It's much different, very, very different," Ingrao said. "I don't know the genus. That could be my lack of knowledge. Someone who's seen 50 million squid might know what it is."

So it might be a new species or even a new genus.

"The thing is, I don't think people realize how many things we don't know about the ocean," Ingrao said. "We're discovering hundreds of species a day."

A researcher from the Smithsonian Institution is expected at Mote on Tuesday for an attempt to identify the squid.