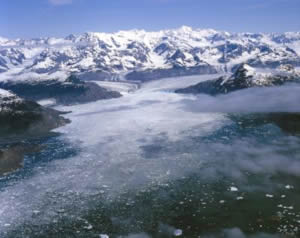 BOULDER, Colorado -- Ice loss from glaciers and ice caps is expected to cause more global sea rise during this century than the massive Greenland and Antarctic ice sheets, according to a new University of Colorado at Boulder study.

The researchers concluded that glaciers and ice caps are currently contributing about 60 percent of the world’s ice to the oceans and the rate has been markedly accelerating in the past decade, said Emeritus Professor Mark Meier of CU-Boulder’s Institute of Arctic and Alpine Research, lead study author. The contribution is presently about 100 cubic miles of ice annually -- a volume nearly equal to the water in Lake Erie -- and is rising by about three cubic miles per year.

“One reason for this study is the widely held view that the Greenland and Antarctic ice sheets will be the principal causes of sea-level rise,” said Meier, former INSTAAR director and professor in geological sciences. “But we show that it is the glaciers and ice caps, not the two large ice sheets, that will be the big players in sea rise for at least the next few generations.”

The accelerating contribution of glaciers and ice caps is due in part to rapid changes in the flow of tidewater glaciers that discharge icebergs directly into the ocean, said the study. Many tidewater glaciers are undergoing rapid thinning, stretching and retreat, which causes them to speed up and deliver increased amounts of ice into the world’s oceans, said CU-Boulder geology Professor Robert Anderson, study co-author.

Water controls how rapidly glaciers slide along their beds, said Anderson. When a glacier with its “toe in the water” thins, a larger fraction of its weight is supported by water and it slides faster and calves more ice into the ocean at the glacier terminus.

“While this is a dynamic, complex process and does not seem to be a direct result of climate warming, it is likely that climate acts as a trigger to set off this dramatic response,” said Anderson, also an INSTAAR researcher.

Alaska’s Columbia Glacier, which is now discharging about 2 cubic miles of ice annually into Price William sound, is a good example, according Anderson. The Columbia Glacier, which has thinned up to 1,300 feet in places, has shrunk by about 9 miles since 1980 and is expected to shrink by another 9 miles in the next two decades.

The team estimated accelerating melt of glaciers and ice caps could add from 4 inches to 9.5 inches of additional sea level rise globally by 2100. This does not include the expansion of warming ocean water, which could potentially double those numbers. A one-foot sea-level rise typically causes a shoreline retreat of 100 feet or more, and about 100 million people now live within about three feet of sea level.

“At the very least, our projections indicate that future sea-level rise may be larger than anticipated, and that the component due to glaciers and ice caps will continue to be substantial,” wrote the researchers in Science Express.

The team summarized satellite, aircraft and ground-based data from glaciers, ice caps, the Greenland ice sheet, the West Antarctic ice sheet and the East Antarctic ice sheet to calculate present and future rates of ice loss for the study. The study was funded primarily by the National Science Foundation and NASA.

Meier estimated there are several hundred thousand small glaciers and small, pancake-shaped ice caps in polar and temperate regions. They range from modest, high mountain glaciers to huge glaciers like the Bering Glacier in Alaska, which measures about 5,000 square miles in area and is nearly one-half mile thick in places.

The researchers used a mathematical “scaling” process to estimate more remote glacier volumes, thicknesses and trends by factoring in data like altitude, climate and geography. They used data gathered from around the world, including cold regions in Russia, Europe, China, Central Asia, Canada and South America.

While warming temperatures will likely cause many small high mountain glaciers in North America Europe to disappear by the end of the century, large ice fields and ice caps will continue to produce large amounts of melt water, Meier said. The scientists also believe many “cold” polar glaciers and ice caps will soon warm up enough to begin melting and contributing to sea rise.

The retreat of the Greenland and Antarctic ice sheets also is giving birth to new, smaller glaciers that are prime candidates for study by scientists. “It is incorrect to assume that the small glaciers will simply go away next century -- they will continue to play a key role in the sea level story,” said Anderson.

Anderson also said that although the volume of ice locked up in Greenland is equal to roughly 23 feet in sea rise, only a small fraction is likely to be “pulled out” during the next century, most of it through outlet glaciers.

Many smaller “benchmark” glaciers around the world that have been under study for decades are expected to disappear by the end of the century, said Anderson. “We need to start gathering benchmark information on some of the larger glaciers that are unlikely to disappear, so that we can have a long-term record of their behavior.”

Anderson said outlet glaciers in Greenland behave much like tidewater glaciers in Canada and Alaska, making them very relevant for long-term study. “Since the world is becoming increasingly aware that sea-level rise is a very real problem, we need to acknowledge the role of all of the ice masses and understand the physical mechanisms by which they deliver water to the sea.”