Researchers: White Shark Diets Vary With Age And Among Individuals 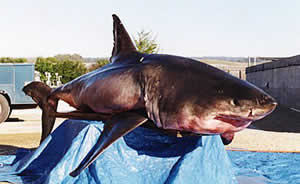 This 1,700-pound great white shark (accidentally caught by a Morro Bay fisherman) was dissected at Long Marine Lab in 2001. Photo by T. Stephens

White sharks, the largest predatory sharks in the ocean, are thought of as apex predators that feed primarily on seals and sea lions. But a new study by researchers at the University of California, Santa Cruz, shows surprising variability in the dietary preferences of individual sharks.

The researchers described their findings in a paper published online September 28 in PLoS ONE. They analyzed the composition of growth bands in shark vertebrae to trace variations in diet over a shark's lifetime. Stable isotopes of carbon and nitrogen incorporated into an animal's tissues serve as a natural tracer of dietary inputs.

"We did find that white shark diets changed with age, as expected, but we were surprised that the patterns and extent of change differed among individuals," said Sora Kim, who led the study as a UCSC graduate student and is now at the University of Wyoming.

The researchers analyzed vertebrae of 15 adult white sharks that had been caught along the west coast (14 off California and one off Baja California). Sharks in this population consume a wide range of prey, including seals, sea lions, dolphins, fish, and squid. But not every shark eats the same mix of prey, said coauthor Paul Koch, professor of Earth and planetary sciences at UCSC.

"We confirmed that the diets of many individuals observed at seal and sea lion rookeries shift from fish to marine mammals as the sharks mature," he said. "In addition, we discovered that different individual sharks may specialize on different types of prey. These two types of flexibility in feeding behavior are difficult to document using traditional methods, but may be very important for understanding how the population is supported by the eastern Pacific ecosystem and how it may respond to changes in that ecosystem."

The National Oceanic and Atmospheric Administration (NOAA) recently announced that it will consider whether to protect the west coast population of white sharks under the Endangered Species Act.

Tagging studies have shown that the white sharks found along the California coast have a regular migratory pattern, cruising coastal sites from late summer to early winter and moving to offshore areas during the rest of the year. While sharks within this population may have predictable movement patterns, the new study shows that there are important dietary and behavioral differences among individual sharks.

The study relied on vertebrae obtained from white shark specimens in various collections. The sharks had been caught at different times and places along the coast from 1957 to 2000. "Interestingly, we do see a small shift in diet as marine mammal populations increased after the passage of the Marine Mammal Protection Act in 1972," Kim said.