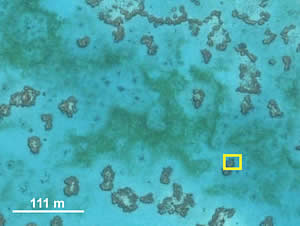 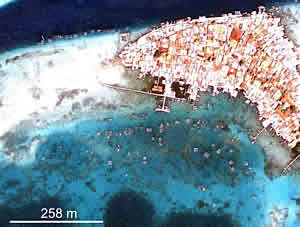 No evidence of halos surrounding patch reefs can be seen on the heavily fished reef adjacent to Indonesia's Panggang Island. (c) 2011 DigitalGlobe

Sydney Australia -- While most of us could find no better use for Google Earth than checking out a holiday destination, scientists in Sydney have shown it can reveal a lot about the behavior of marine life on the Great Barrier Reef.

In what is believed to be the first research of its kind, University of Technology, Sydney marine biologist Dr Elizabeth Madin and colleagues - including Dr Joshua Madin of Macquarie University and Professor David Booth from UTS - have used Google Earth satellite images to observe the indirect effects of behavioral interactions between predators and prey in the lagoon habitat at Heron Island.

The results, published in the paper "Landscape of fear visible from space" in the first issue of the journal Nature Scientific Reports, have revealed distinct patterns of grazing halos - rings of bare sand devoid of seaweed - within the algal beds surrounding isolated groups of coral.

Grazing halos have been attributed by previous researchers to fish and/or urchin herbivory (seaweed feeding). These creatures are thought to shelter from predators within reefs and then make foraging expeditions radiating outwards.

In-situ lagoon surveys showed that algal canopy height increased with distance from reef edges and grazing experiments confirmed that herbivore grazing was responsible for these patterns.

The work indicates that herbivores' collective anti-predator behavioral patterns can shape vegetation distributions that are clearly visible from space.

"To our knowledge, this is the first time anyone has used freely-available Google Earth images to identify these features, and then actually tested them on the ground to confirm that we're seeing exactly what we think we're seeing from the satellite images," Dr Elizabeth Madin said.

"This is significant because it could potentially lead to the development of a conservation tool which is both rapid and inexpensive. For example, by comparing sequential Google Earth images over time, the cascading, indirect effects of predator removal - say through fishing or the establishment of a protected reserve - could be monitored nearly anywhere on Earth."

The research was funded by the US National Science Foundation and the Australian Research Council.