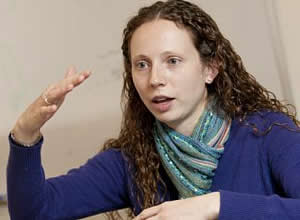 PALO ALTO, California -- A mass extinction is hard enough for Earth's biosphere to handle, but when you chase it with prolonged oxygen deprivation, the biota ends up with a hangover that can last millions of years.

Such was the situation with the greatest mass extinction in Earth's history 250 million years ago, when 90 percent of all marine animal species were wiped out, along with a huge proportion of plant, animal and insect species on land.

A massive amount of volcanism in Siberia is widely credited with driving the disaster, but even after the immense outpourings of lava and toxic gases tapered off, oxygen levels in the oceans, which had been depleted, remained low for about 5 million years, slowing life's recovery there to an unusual degree.

The reason for the lingering low oxygen levels has puzzled scientists, but now Stanford researchers have figured out what probably happened. By analyzing the chemical composition of some then-underwater limestone beds deposited over the course of the recovery in what is now southern China, they have determined that while it took several million years for most ecosystems in the ocean to recover, tiny single-celled algae and bacteria bounced back much more quickly.

In fact, according to biogeochemist Katja Meyer, the tiny organisms rebounded to such an extent that the bigger life forms couldn't catch a break â much less their breath â because the little ones were enjoying a sustained population explosion.

As the vast hordes of tiny dead organisms rotted, dissolved oxygen in the seawater was consumed by aerobic microbes involved in the decay process, leaving scant oxygen for larger organisms in what became an oxygen-depleted, or anoxic, environment.

The driver of the ongoing population boom appears to have been the massive amounts of carbon dioxide pumped into the atmosphere during the volcanism, Meyer said, which caused the world to warm.

"More warmth means an invigorated hydrological cycle, so you get more rain and this rain is also more acidic because there is more carbon dioxide dissolved in the rain," Meyer said.

The increased amounts of more acidic rain increased weathering of the land surface, which sent more nutrients into the ocean, which fueled explosions of life such as algae blooms.

"It is kind of counterintuitive that high productivity on the part of algae and bacteria would likely be generating these toxic geochemical conditions that prevent most of animal life from recovering from mass extinction," Meyer said.

But the process, she said, is basically the same as when excess runoff from fertilizers goes into a body of water, whether it's a pond on a golf course or the infamous dead zone in the Gulf of Mexico created by farm runoff carried down the Mississippi River.

"You get this giant bloom of algae and then it starts to smell bad as that algae decays, pulling oxygen out of the water and causing fish die-offs," Meyer said.

In spite of the almost inestimably high numbers of algae and bacteria living and dying during this time, there is little direct evidence of them in the fossil record because such tiny, soft-bodied creatures just don't preserve well.

So Meyer and her colleagues had to work with indirect evidence of the microorganisms to determine their abundance during the years after the mass extinction. The population proxy they used was the carbon present in the limestone.

Carbon â like all elements â comes in different varieties, called isotopes, distinguished by the number of neutrons each has in its nucleus. The researchers worked with two carbon isotopes, carbon 12, which has six neutrons, and carbon 13, which has seven.

Both isotopes are present in ocean water, but living things on Earth have always shown a preference for incorporating the lighter isotope, carbon 12, into their structures. Thus, where life is abundant, the ratio of carbon 13 to carbon 12 in seawater is higher than it is where there is no life.

Limestone records the composition of the seawater in which it was deposited, including the relative amounts of light and heavy carbon isotopes, so by analyzing the isotope ratio in the rocks, Meyer could infer the abundance of life in the water where the limestone formed.

Comparable modern environments, such as the Bahama Banks in the Caribbean Sea, where carbonate platforms similar to the limestones are forming, are typically teeming with life at the range of depths in which Meyer's limestones formed. In these environments, the ratio of carbon 13 to carbon 12 is generally constant from shallow to deep water.

But microorganisms are typically most abundant in shallow waters, so if marine life in the era after the mass extinction had been confined to algae and bacteria, then the shallower depths should show a markedly greater ratio of carbon 13 to carbon 12 than would be found at depth.

Meyer's analysis showed there was a difference of about 4 parts per thousand in carbon isotope ratios from the shallow waters to depths, roughly twice what it is today.

"We only see this gradient in the interval after the mass extinction prior to the recovery of animal life," said Meyer.

Meyer is the lead author of a research paper about the study published last month in Earth and Planetary Science Letters. The extinction 250 million years ago is known as the Permian-Triassic mass extinction, as it coincides with the end of the Permian period and the beginning of the Triassic period on the geologic time scale.

"It appears there was a huge amount of biological productivity in the shallow waters that was making the bottom waters uninhabitable for animals," said Jonathan Payne, assistant professor of geological and environmental sciences, who is a coauthor of the paper and in whose lab Meyer has been working.

"It looks like the whole recovery was slowed by having too much food available, rather than too little," Payne said. "Most of us think that if the biota isn't doing well, maybe we should feed it more. This is clearly an example where feeding it less would have been much better."