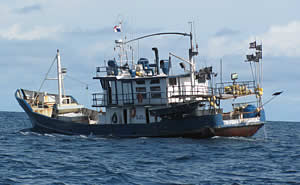 PANAMA CITY, Panama -- After banning commercial purse seining from its waters in July, the Republic of Panama has taken further steps adding restrictions on longlining for the conservation of its marine life and its socio-economic growth.

In letters to Panamanian officials, Ellen Peel, President of The Billfish Foundation and Chris Fischer founder of OCEARCH, applauded the government for becoming the first of the seven Central America nations to restrict pelagic longline gear within its waters. The practice of commercial in the region uses hundreds of baited hooks attached to short lengths of line spaced at intervals to main lines. The longliners target swordfish and tuna, but also hook bycatch species including sharks, turtles and recreational billfish like marlin and sailfish.

Panama's Executive Decree 486 signed by President Ricardo Martinelli on Dec. 28, 2010, prohibits longline vessels of over six tons from operating within the nation's waters.

"This action," said Ms. Peel, "is the latest in a growing trend that makes Panama one of the most proactive, innovative and committed fishery managers in the world and results from the increasing influence of the collective sport fishing community.

"After prohibiting tuna purse seining in July the signing of these two agreements acts directly on two of the greatest sources of overfishing of marlin and tuna species while creating appropriate sustainable management plans for billfish and other popular game fish vital to growing sportfishing and tourism in the Central America region."

OCEARCH's Fischer who is also on the board of TBF said, "Through this decree the Republic of Panama becomes a global leader in the responsible management of ocean resources and a more established force in the international sport fishing tourism marketplace."

In Panama, Dr. Ruben Berrocal, National Secretary of SENACYT (SecretarÃ­a Nacional de Ciencia, TecnologÃ­a e InnovaciÃ³n) added, "The President's decision underscores his commitment to preserving our natural resources for future generations; and the economic and scientific benefits these measures produce are well-established. Through sustainable marine management efforts and the careful consideration of important advocacy programs to maintain our game fish--such as those supported by The Billfish Foundation--we are committed to ensure that Panama remains a world-renowned destination where commerce, science and economic productivity can live in harmony."

TBF, through a 2009 agreement with the Organization of Fisheries and Aquaculture for the Isthmus of Central America (OSPESCA), developed a management plan for sportfishing in the seven nation region assisting each nation in developing appropriate national conservation goals to enhance sportfishing tourism. It includes recreational fishing monitoring and data collecting programs using TBF tags and catch reports to gather vital statistics for decision makers to better understand the dynamics of sport fishing as an important economic tool.

TBF has been working with the governments of Mexico, Costa Rica and Peru â some for over a decade â to protect billfish, mainly from overfishing coastal fisheries by commercial interests, while implementing tag and release programs for sportsmen.

Established 25 years ago, The Billfish Foundation is the only non-profit organization dedicated solely to conserving and enhancing billfish populations around the world. TBF's comprehensive network of members and supporters includes anglers, captains, mates, tournament directors, clubs and sport fishing businesses. By coordinating efforts and speaking with one voice, TBF is able to work for solutions that are good for billfish and not punitive to recreational anglers. Visit http://www.billfish.org or to reach Ms. Peel, ph. 800-438-8247, ex.108.