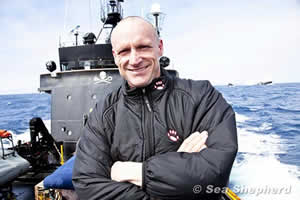 Animal Planet today announced it has given the green light for a new WHALE WARS one-hour special series episode featuring Captain Pete Bethune of the Sea Shepherd Conservation Society. During the two-hour season finale, viewers' last glimpse of eco-pirate and anti-whaling activist Bethune will be when he is taken into custody by Japanese authorities and brought to Tokyo, where he had been held on charges of trespassing, obstructing the passage of a vessel, carrying a knife and damaging property. Bethune, whose story arc has captivated audiences this season as his beloved vessel the Ady Gil collided with the Shonan Maru 2 and sank into the bottom of the Southern Ocean, spent months in custody but was released on July 9, 2010 and returned home to New Zealand. The special is slated to air following the season finale of BLOOD DOLPHINS on Friday, September 17 at 10 PM (ET/PT).

The exclusive one-hour special episode of WHALE WARS features Bethune as he shares with the Animal Planet audience his experiences where cameras could not follow - on board the ship that held him for nearly a month and subsequently the three months he was detained in Japan. How was he treated during his detention? What went through his mind during that harrowing time? The outspoken whale warrior will share revelations, opinions and thoughts on the experience after spending four months contemplating his decisions and fate until finally being released. In addition to Bethune's interview, the special will reveal his background, showcase the most exciting highlights from the season featuring Bethune, Captain Paul Watson and other members of Sea Shepherd, and delve into what's next for this environmental cowboy.

"WHALE WARS viewers really have connected with Pete's passion this season," says Marjorie Kaplan, president and general manager of Animal Planet. "His actions in this campaign put him at the center of some very dramatic action. We're fortunate that he's agreed to open up about his extraordinary experiences at sea and on land to save whales."

For the past several years, Captain Paul Watson and his Sea Shepherd Conservation Society crew have taken to the high seas to attempt to stop Japanese ships from hunting whales in the Southern Ocean Whale Sanctuary. WHALE WARS documents the ongoing battles in the icy Antarctic waters in each adrenaline-fueled season as the conflict between Sea Shepherd and the whalers grows more intense with each engagement - each pushing the other to the limit to fight for what they believe. Watson and his eclectic group of international staff and volunteers - labeled activists and heroes by some, eco-pirates by others - take a hard-line approach to eradicate whaling and what they view as ocean-law violations. Highlighting the controversial whaling trade and the tactics that the Sea Shepherds deploy to attempt to cripple it, the series documents the group's three-month expedition across icy Antarctic waters.

WHALE WARS follows a masterful match at the far end of the globe as both Sea Shepherd and the Japanese whalers engage in an environmental showdown with millions of dollars at stake. The team of oceanic crusaders join forces and set out to risk it all to save the whales, even if that might mean not all crew members make it back to port together. Season three concludes with a two-hour special on Friday, August 27 at 9 PM (ET/PT).

The Academy of Television Arts and Sciences recognized WHALE WARS last spring for exploring issues of concern to our society in a compelling, emotional and insightful way by bestowing the series with a Television Academy Honor which identifies it as "television with a conscience." The series has been nominated for a Primetime Emmy® for Outstanding Cinematography in a Non-Fiction Series and Outstanding Picture Editing for a Non-Fiction Series. Seasons one and two of the series are available on DVD at AnimalPlanetstore.com.