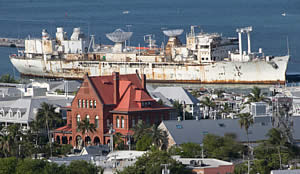 The Gen. Hoyt S. Vandenberg has arrived in Key West on Wednesday

The Vandenberg is docked behind the USS Mohawk, a historic Coast Guard ship open as a floating museum, at the East Quay Wall in Truman Annex Harbor.

"We're all pretty excited here in Key West and particularly in view of the fact this is going to be the second largest artificial reef in the world," said Key West City Commissioner Bill Verge, who is serving as a project liaison between the city and various state and federal agencies.

Final preparations to sink the ship is beginning today. Project organizers said the scuttling should take place sometime between May 20 and June 1, about six miles south of Key West in 140 feet of wather in the Florida Keys National Marine Sanctuary.

That work primarily involves the cutting of hundreds of large holes on the ship's decks and sides to help ensure the vessel sinks in an upright position.

The Vandenberg was formally retired in 1983 and was transferred to the James River Naval Reserve Fleet. But, according to Patrick J. Utecht, who managed the ship's electronic systems, a team of six technicians would visit Vandenberg every six months to power up all shipboard electronics and make any necessary repairs. Despite the state of readiness, the ship was never used again and in 1993, was formally struck from the naval register and transferred to the Maritime Administration.

"One of the big products that we make here is happy vacations," said Joe Weatherby who conceived the project some 13 years ago. "And we feel that this artificial reef is the world's best product ever produced for scuba diving. People are going to come from all over the world to dive this, but this product also has been designed so we can offer it to glass bottom boat riders, snorkelers or new divers as well as advanced divers, it hold interest for all of them."