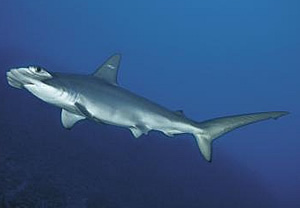 According to an April 2012 article in the scientific journal Marine Biology, the new look-alike hammerhead species has now been discovered more than 4,300 miles away near the coast of southern Brazil. This confirms that the original finding was not a local oddity and the new species is much wider spread. The look-alike species may face the same fishery pressures as the real scalloped hammerhead, which is being fished unsustainably for its highly prized fins.

"It's a classic case of long-standing species misidentification that not only casts further uncertainty on the status of the real scalloped hammerhead but also raises concerns about the population status of this new species," says professor Mahmood Shivji, Ph.D., who oversaw the new research at the NSU-OC's Save Our Seas Shark Center USA and Guy Harvey Research Institute.

Tens of millions of sharks are being killed for their fins and meat worldwide, resulting in dramatic reductions in shark populations and concerns about the broad scale negative impacts to ocean ecosystems. This has prompted international protection and other management efforts to reduce the unsustainable slaughter of sharks.

"It's very important to officially recognize, name and learn more about this new hammerhead species and the condition of its populations through systematic surveys," Shivji says. "Without management intervention to curtail its inadvertent killing, we run the risk that overfishing could eradicate an entire shark species before its existence is even properly acknowledged."

Shivji's team first discovered the new hammerhead species in 2005 when examining the DNA of sharks thought to be scalloped hammerheads based on their physical appearance. A research team from the University of South Carolina independently confirmed the existence of the new species in 2006.

The status of the scalloped hammerhead (Sphyrna lewini) is currently under review by the U.S. National Marine Fisheries Service to determine if it warrants listing as threatened or endangered under the U.S. Endangered Species Act. It's already on the red list of endangered species of the International Union for Conservation of Nature and Natural Resources (IUCN). The new species is on neither list.

According to Danillo Pinhal, Ph.D., an assistant professor at the UNESP-SÃ£o Paulo State University in Brazil who performed the lab work as a visiting graduate student in Shivji's laboratory in 2009, "the finding of this species all the way down in Brazilian waters, where hammerhead sharks are heavily fished, raises concerns about the population status of both species not just in U.S. waters but throughout the western Atlantic. It's an international issue now and it's essential that further research on this new species be conducted in Brazilian waters."

Other than differences in their DNA, the two shark species also differ in their number of vertebrae. The new look-alike species has approximately 20 fewer vertebrae than the scalloped hammerhead, in the range of 170 vs. 190. An analysis of the DNA suggests that the new species and the scalloped hammerhead separated from each other approximately 4.5 million years ago, a surprisingly long time given how similar they look externally.

There are three well-documented species of large hammerhead sharks (scalloped, great and smooth hammerheads), and their fins have high value in the international shark fin trade. The finding of this new hammerhead now brings the total to four large species with this unique hammerhead shape.

Hammerheads and other large sharks have been overfished for years. Scientists are concerned that further reductions in their numbers and biodiversity may irreversibly alter the ocean's intricate food web and upset ecosystem balance. For example, a high-profile study has shown that the large reduction of sharks off the U.S. East Coast is associated with a huge increase in the population of one of their prey --- the cownose ray --- which in turn has then been responsible for overeating the bay scallop, dramatically reducing the supply of scallops for the fishing industry.