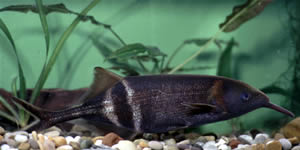 Scientists have determined that the Elephantnose fish uses its chin to search for food. Credit: Dr. M. Zahn, Aquazoo DÃ¼sseldorf

BONN, Germany -- Originating in Central Africa, Peters' elephantnose fish (Gnathonemus petersii), finds its bearings by means of weak electrical fields. Scientists from the University of Bonn have now been able to show how well this works. In complete darkness the animals can even distinguish the material of objects at a distance or dead organisms from living ones.

The results have now been published in the Journal of Experimental Biology.

The fish, which is as long as a cigar, hovers with its head inclined, close to the gravel-covered bed. While it swims forward slowly, its trunk-like elongated chin sweeps steadily from right to left, always at a distance of a few millimetres from the bottom. This way the fish behaves like treasure hunters searching for buried gold coins on the beach with their metal detector. Basically, this is precisely what the fish is doing. Hidden in the sediment there are large numbers of dead nematocera larvae waiting for it, its favourite food.

Zoologists from the University of Bonn have hidden the larvae there. 'We wanted to see whether it can find them and if the answer is yes, then down to what depth,' Professor Gerhard von der Emde explains. 'It', that is the African Peters' elephantnose fish. Yet its characteristically shaped chin does not work like a particularly sensitive nose. Instead, it contains more than 500 electric sensors with which it senses its surroundings. With this sense the animal has conquered the night. During the day it hides, only under cover of darkness does it goes searching for food.

The chin of Peters' elephantnose fish is basically its eye. In its tail is the corresponding torch. Via mutated muscle cells it produces regular electrical pulses of a few volts with it. 80 times per second the fish switches this little battery on and off for the blink of an eye. 'At the same time it measures the electrical field which builds up around it via sensors in the skin,' explains Professor von der Emde. Nearby objects distort the field, so that the fish obtains an image of its surroundings, which is a surprisingly complex one.

Professor von der Emde and his team have tested what the animals can perceive with their electric sense. For this they set up a small cube and a pyramid in an aquarium, for example. Whenever the fish swam to the pyramid, they were rewarded with a nematocera larva. Their eyes were no use to these agile fish, because the experiments took place with infrared lighting, so that only the researchers could see anything, using their special cameras. They were flabbergasted themselves by their results. In nine out of ten cases the fish swam straight towards the pyramid through the pitch black darkness. Even when the researchers used wire models instead of solid objects, the fish could not be fooled. They were even able to handle discontinuous contours. 'For example, we removed the vertical edges of a cube, i.e. we embedded two wire squares on top of each other in a gel that was permeable for electrical fields,' Professor von der Emde says. 'The fish still perceived it as a cube, so they supplied the contours very much like humans would.' Furthermore, they seem to calculate the volume of objects in water. 'A cube has a larger volume than a pyramid of the same height,' Gerhard von der Emde explains. 'If we decreased the size of the cube so much that its volume became smaller than that of the pyramid, the fish often changed their minds and swam to the cube.' So, the Peters' elephantnose fish can also internalise abstract concepts: 'Always swim to the less voluminous of two objects, irrespective of their absolute size.'

As in Starship Enterprise

What Bones, the ship's doctor of the Enterprise does, the little fish from Africa has been doing for a long time, viz. distinguishing living from dying or dead organisms without touching them. 'With its electric sense, it measures their capacitative properties, i.e. their ability to store charges,' Prof. von der Emde explains. 'Dead plants or animals cannot do that.' The electrical field image even tells it what material the object in question is made of. The image of metal is very bright, by contrast non-conductors weaken the electrical field around the fish. And it can even measure distances to a precision of several millimetres. In order to do so, it uses the fact that the electrical image becomes increasingly 'blurred'. From the degree of fuzziness it thus calculates the distance.

There is a reason for this brain power. The cerebellum of Peters' elephantnose fish is hugely enlarged. In comparison with their body length the animals have a larger brain than humans. 'They are really intelligent,' the zoologist says fondly, 'that's why it is so much fun working with them.' At one point he tried to train electric fish from South America. 'That was a flop,' he reminisces, 'the fish are beautiful, but definitely too stupid for complex tasks.'