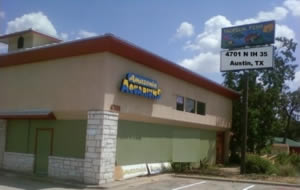 AUSTIN, Texas -- An Austin, Texas, tropical fish and aquarium store is pulling off all the tops in a special "Black Friday" sales promotion. Caroline Estes, owner of Amazonia Aquariums, will go topless this Friday in hopes of boosting tropical fish sales.

Her store, opened in 1992, recently moved. Between the recession and the move, she says sales have been down. "I'll save my business with whatever it takes," says Estes.

Estes is no stranger to this kind of publicity. In 2001, she organized a topless protest in Austin during Mardi Gras 2001 that caused a "topless riot". Estes' group demanding the local police recognize each citizen's right to go topless. The tops came off and the protest group was promptly surrounded by 50 police clad in full riot gear.

Remembering the power of the breasts, Ms. Estes has once again decided to use two of her best assets to accomplish a goal. She hopes riot gear won't be needed to control the crowds in this topless action.