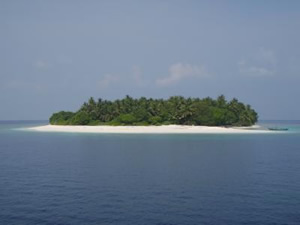 This is one of the study sites Dhakandhoo, in the Maldives. Credit: University of Exeter

The continued accumulation of sand within the iconic ring-shaped reefs inside Maldivian atolls could provide a foundation for future island development new research suggests. Islands like the Maldives are considered likely to be the first to feel the effects of climate change induced sea level rise, with future island growth essential to counter the threat of rising sea levels.

The researchers studied the history and timing of island building, a process which starts when the lagoons fill sufficiently with sand that is derived from the surrounding corals reefs, to provide a foundation for island establishment. Assuming these reefs continue to flourish and can thus maintain high rates of sand supply, those lagoons that are already nearly full have clear potential to provide foundations for new island development over the next few hundred years.

Professor Chris Perry from the University of Exeter said: "Many of the heavily populated islands in the Maldives have limited capacity to respond naturally to sea-level rise and this will necessitate additional spending on shoreline maintenance. Our research suggests, however, that the potential does exist for new island formation on those reefs inside the atolls that have near fully infilled lagoons. These may ultimately provide additional land options across the region, and some possibilities for mitigation options under higher sea level conditions."

The study suggests that it is the smaller reefs, with lagoons that are already nearly in-filled, that are most likely to give rise to new islands. Once established, and given sufficient sand supply, the findings suggest that these new islands can develop rapidly, over a few 100 years, and that these may then evolve into larger, island structures that could provide alternative land options in the region. Evidence from this region also suggests that many existing islands established and expanded under slightly higher than present sea-levels over the last few 1000 years.

Larger reefs with deeper, unfilled, central lagoons are likely to only fill with sand over much longer timescales and are thus unlikely to support new island development over any meaningful future timescales.

Sea level rise is projected to put increasing pressure on the Maldives. Heavily populated islands, including the low-lying capital Male, have limited capacity to respond to natural shoreline changes and will thus require ever more costly management interventions to sustain them under projected sea level rises.