Aussie Vows to Rid Coast of Bull Sharks; 'They're Bastards. I'm Going to Eradicate Them' 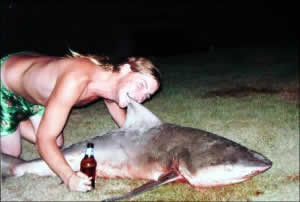 Ian Robinson shows off one of his catches and gets in a bite for good measure.

The 28-year-old Mermaid Waters man is on a mission to rid our waterways of the deadly predators -- by catching them all.

"They're bastards. I'm going to eradicate them, I'm going to clean them out," he said. "I've got to get the sharks out of the water."

And so far, the scorecard reads Ian: one, bull sharks: zero.

On only his second attempt at catching the monsters, Mr Robinson hauled in a 2m shark while fishing from his back yard on Sunday night.

"Within 15 minutes of throwing the line in I was getting bites," he said.

"The first night all the bait got taken then on the second night I hooked one up.

"Me and my girl we're fighting for about half an hour to get it in, I had to call a mate to come help me."

Mr Robinson said he began his quest to eradicate the sharks so he could safely return to his favorite pastime -- mud crabbing.

"I use to catch mud crabs but I'm afraid to catch them now because there are so many sharks, I can't go out on my kayak because it's not safe.

Mr Robinson said that while crabbing he had a close call with a shark.

"I had one splash behind me when I was picking up the crabs, after that I stopped putting my feet in the water.

Fishing expert Paul Burt said Mr Robinson would have a hard time eradicating the sharks as the Coast's canals were bursting at the seams with them.

During the 2002-2003 summer, two swimmers, Beau Martin and Bob Purcell, were killed by bull sharks as they swam in canals at Burleigh.

Last year, Sarah Whiley was mauled to death by bull sharks as she swam off Amity Point on North Stradbroke Island.

Mr Robinson believes more people will be killed by the predators unless proper signs are installed along the canals and rivers.

"I want bloody signs saying 'no swimming'. There should be warning signs like north Queensland has for crocodiles.

"I (expletive deleted) myself every time I see someone in the water.

"You see kids jumping in the water and paddling around ... I'm pretty worried."

A Gold Coast City Council spokeswoman said the council would not erect warning signs at canals and waterways this summer because it was too difficult.

"We have 480km of rivers and streams and 770ha of lakes and dams on the Coast. Signposting all of them is simply not feasible," she said.

To help in his quest to eradicate the predators, Mr Robinson believes a bull shark fishing competition should be held and a reward should be paid to fishermen who catch them.

"There should be a bounty on their heads, ten bucks or whatever to encourage people to catch them," he said.

"We should have a bull shark classic or something like that."

"I love shark, we cut half a fillet off and couldn't fit anymore in the freezer," he said.