3,500 Artificial Reef Domes Placed Off Philippines Coastal City; 'I Hope That Others Will Follow Our Lead' 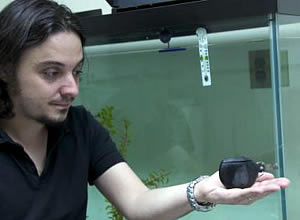 BROOKLYN, New York -- Artificial intelligence? Done. Artificial leadership? Its origins may well be in the fish tanks and the algorithms in Maurizio Porfiri's Brooklyn laboratories at Polytechnic Institute of New York University (NYU-Poly). Here the assistant professor of mechanical engineering, best known for modeling advanced smart materials, is using those materials, plus a lot of mathematics and his love for animals and science fiction, to build robots that lead schooling fish.

Someday, Dr. Porfiri hopes, robots could lead fish away from the turbines of power plants. They could lead flocking birds to new wintering grounds if their forests have been destroyed and humans to safety when a fire breaks out. But first engineers must uncover the mechanics of leadership for each of these life forms.

Dr. Porfiri chose to start with the bait fish swimming in his tanks because their information-sharing is particularly rich: They make their decision on whether to school based upon what they see and the flow that they feel, which can be studied using fluid dynamics. Fish leaders, according to biologists' published literature and Dr. Porfiri's observations, beat their tails faster, mill about and accelerate to gain attention, gather a school and lead it.

Using a shallow, donut-shaped tank and cameras, the NYU-Poly team began a mathematical journey into fish schooling in one-dimensional environments. They recently reported their results from this study in the Journal of the Royal Society Interface. Meanwhile, they built silent, remotely controlled, fish-like robotic swimmers that fit in the palm of a hand. These first robots can "swim" along a plane; the next step is to create robots that can dive and surface. Dr. Porfiri's first technical paper on the robotic fish received the Best Robotics paper award at the 2009 American Society of Mechanical Engineers Conference on Dynamic Systems and Controls.

Since fish of different sizes and species school together, Dr. Porfiri correctly hypothesized that they would not only accept a robotic peer that was larger than themselves but also welcome it as a group leader.

To engage live shoal mates, Dr. Porfiri wanted to give the robot other fish qualities. Foremost, it would have to swim silently, and its locomotion would have to closely match that of live fish. To achieve these goals, he employed ionic polymers that swell and shrink in response to electrical stimulation from a battery, propelling the robot.

Meanwhile, the fish modeling continues as the team explores the effect of the species' numerosity, or perception of numbers, on schooling behavior. (Fish intuitively count three or four objects around them, as opposed to about ten for humans.) The researchers study their formation, intelligence, computing capacity and the ways they avoid predators for clues to other living creatures. Their research will also find application in autonomous vehicle teams, including submarines, airplanes and ground vehicles.

Dr. Porfiri is the recipient of the prestigious National Science Foundation CAREER award in Dynamical Systems in 2008, and he is the author of more than 60 journal papers in the broad field of mathematical modeling and control of complex systems. His research has been funded by the National Science Foundation, the U.S. Office of Naval Research, the Honors Center of Italian Universities, the Wildlife Conservation Society and New York University Seed Grants. Dr. Porfiri is currently advising a team of more than a dozen graduate and undergraduate students; some of these students have received prestigious awards such as the National Science Foundation Graduate Fellowship and best conference paper and presentation awards at international conferences.