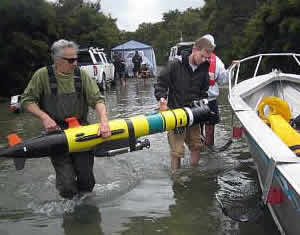 Dan Fornari (left) and Robin Littlefield, of WHOI, load a REMUS UAV prior to a mission under Lake Rotomhana, New Zealand. Photo by Julian Thomson, GNS

WOODS HOLE, Massachusetts -- They were called the Eighth Wonder of the World. Until the late 19th century, New Zealand's Pink and White Terraces along Lake Rotomahana on the North Island, attracted tourists from around the world, interested in seeing the beautiful natural formations created by a large geothermal system. But the eruption of Mt. Tarawera on June 10, 1886, buried the terraces in sediment and caused the lake basin to enlarge, engulfing the land where the terraces stood. For more than a century, people have speculated whether any part of the Pink and White Terraces survived the eruption.

This week, scientists from New Zealand's GNS Science, one of several government laboratories, in collaboration with engineers and scientists from Woods Hole Oceanographic Institution (WHOI) and colleagues from Lamont-Doherty Earth Observatory of Columbia University and NOAA-PMEL, located portions of the long-lost Pink Terraces.

The research team, using autonomous underwater vehicles (AUVs) to map the bottom of Lake Rotomahana, are certain they have found the lower portions of the Pink Terraces on the lake floor. Project leader Cornel de Ronde, of GNS Science, said the team was elated by the discovery.

"The first sidescan sonar image gave a hint of a terraced structure so we scanned the area twice more and we are now 95 percent certain we are seeing the bottom two tiers of the Pink Terraces," de Ronde said.

Side-scan sonar and bathymetric data collected by two REMUS 100 AUVs clearly show crescent-shaped terraced structures in about 60 meters of water where the Pink Terraces were located prior to 1886. They are covered by a brownish lake sediment.

The free-swimming REMUS vehicles were developed by WHOI with funding from the US Navy and were operated by Amy Kukulya and Robin Littlefield of the WHOI Oceanographic Systems Laboratory (OSL) who travelled to New Zealand for the expedition. Dan Fornari, a scientist with the WHOI Geology & Geophysics department, helped lead the expedition and, along with Marshall Swartz of the WHOI Physical Oceanography department, developed the underwater camera system used in the lake.

After detecting areas of interest with the AUV's sonar systems, the team used the underwater camera system, developed with funds from the U.S. National Science Foundation, to capture images of the lake floor where they were able to photograph some of the stepped terrace edges.

Dr. de Ronde said the rest of the Pink Terraces were either destroyed during the eruption, or are still concealed under thick sediment not able to be penetrated by high-frequency AUV sonars.

The scientists found no sign of the larger White Terraces in the part of the lake that matched their location prior to 1886. The two terraces, part of a very large on-land geothermal system, were separated by several hundred meters prior to the eruption.

There are very few examples of large land-based geothermal systems that have been torn apart by an eruption and become inundated in this way. Scientists hope the data collected during this expedition will help them better understand how geothermal systems respond to disruptions of this kind.

"It was very gratifying to take the tools and knowledge we've developed for ocean research and apply them to work in the lake, especially for a scientific project with so much Maori cultural significance."

In 2009, WHOI signed a memorandum of understanding with GNS and New Zealand's National Institute for Water and Atmospheric Research (NIWA) to expand research and technology development collaborations across the scientific disciplines in the southwest Pacific and within New Zealand territorial waters. In addition to the work in Lake Rotomahana, the organizations are also collaborating on deep ocean research on the Kermadec Seamounts north of New Zealand's North Island using the Sentry AUV and TowCam deep-sea imaging system.

"We hope the success in Lake Rotomahana is the first of many scientific collaborations in this part of the world where there are many interesting research problems to investigate."

The project was a collaboration involving GNS Science, Woods Hole Oceanographic Institution in Massachusetts, Lamont-Doherty Earth Observatory at Columbia University in New York, the National Oceanic and Atmospheric Administration in Seattle, and the University of Waikato.

After this week's discovery, de Ronde paid tribute to colleagues from WHOI, saying "This result would not have been possible without the team from Woods Hole Oceanographic Institution and their American colleagues. Their contribution has been huge."