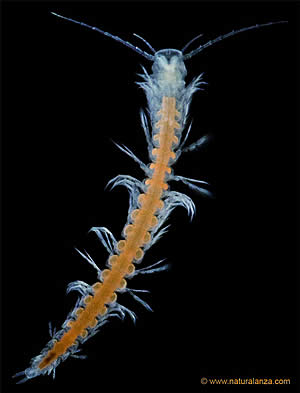 Scientists and cave divers have discovered a previously unknown species of crustacean, belonging to the remipede genus Speleonectes. Credit Springer

COLLEGE STATION, Texas -- During a cave diving expedition to explore the Tunnel de la Atlantida, the world's longest submarine lava tube on Lanzarote in the Canary Islands, an international team of scientists and cave divers have discovered a previously unknown species of crustacean, belonging to the remipede genus Speleonectes, and two new species of annelid worms of the class Polychaeta.

They gracefully swim through the complete darkness of submarine caves, constantly on the lookout for prey. Instead of eyes, predatory crustaceans of the class Remipedia rely on long antennae which search the lightless void in all directions. Like some type of science fiction monster, their head is equipped with powerful prehensile limbs and poisonous fangs.

Accordingly, the translations of their Latin names sound menacing. There is the "Secret Club Bearer" (Cryptocorynetes) or the "Beautiful Hairy Sea Monster" (Kaloketos pilosus). The names of some genera were inspired by Japanese movie monsters, for example, the "Swimming Mothra" (Pleomothra), the "Strong Godzilla" (Godzillius robustus) or the "Gnome Godzilla" (Godzilliognomus).

The team consisted of scientists from Texas A&M University and Pennsylvania State University in the U.S., the University of La Laguna in Spain, and the University of Veterinary Medicine Hannover and University of Hamburg, both in Germany. The extensive results of the Atlantida Diving Expedition will be presented in a special issue of the Springer journal Marine Biodiversity, comprising seven articles, to be published in September 2009.

The newly discovered species of Remipedia was named Speleonectes atlantida, after the cave system it inhabits. It is morphologically very similar to Speleonectes ondinae, a remipede that has been known from the same lava tube since 1985. Based on DNA comparisons, the group of Prof. Stefan Koenemann from the Institute for Animal Ecology and Cell Biology of TiHo Hannover conclusively proved that the lava tunnel harbors a second remipede species. The divergence of the two species may have occurred after the formation of the six-kilometer lava tube during an eruption of the Monte Corona volcano some 20,000 years ago.

Remipedia are among the most remarkable biological discoveries of the last 30 years. The first specimens of this crustacean group were discovered in 1979 during dives in a marine cave system on Grand Bahama in the Bahamas archipelago. Since then, 22 species of Remipedia have been discovered. The main distribution area of the cave-limited group extends from the Yucatan Peninsula in Mexico, through the northeastern Caribbean. However, two geographically isolated species inhabit caves in Western Australia and Lanzarote.

The occurrence of these disjunct species has continues to give rise to speculation about the evolutionary origins and history of Remipedia. Since it is assumed that the relatively small (largest specimens are up to four centimeters long) and eyeless cave-dwellers could not cross an entire ocean by actively swimming, there must be other reasons for their disjunct global distribution. It has therefore been suggested that Remipedia are a very ancient crustacean group, which was already widespread in the oceans of the Mesozoic, over 200 million years ago. For these reasons, remipedes are often considered as a primeval group of crustaceans.

According to this evolutionary scenario, the newly discovered species Speleonectes atlantida and the previously known species Speleonectes ondina, both occurring in the undersea lava tube on Lanzarote, would represent ancient relicts that became isolated from the main Caribbean group during the formation of the Atlantic Ocean.