Research: Seabirds' Movement Patterns Tied To What Fishermen Toss Away

The Feathers Have It: Mercury On The Rise In Endangered Pacific Seabirds 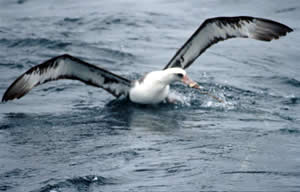 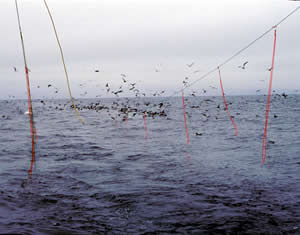 WASHINGTON, D.C. -- Fishing fleets from more than 30 countries on the high seas of the Atlantic and Pacific will now use new ways to avoid accidentally snaring seabirds going after bait on long lines. The new protections are the focus of strong international measures, promoted by NOAA, that go into affect this year.

The measures will protect many albatross and seabird species that fly far from land and whose populations are declining faster than most birds around the world, in part due to their incidental catch in fishing long lines used to catch tuna, swordfish and other tuna-like fish.

“Some of the most vulnerable seabird populations travel entire oceans in search of food. Seabird conservation will require nations with longline fishing fleets to work together to adapt their fishing practices to avoid seabirds wherever they fish,” said Navy Vice Adm. Conrad C. Lautenbacher, Ph.D., NOAA administrator and under secretary of commerce for oceans and atmosphere.

In November, the International Commission for the Conservation of Atlantic Tunas adopted a requirement that the European Commission and 44 other nations use special gear and techniques to reduce the unintended catch of seabirds. The techniques include fishing at night when few birds are active, weighting fishing lines so the baited hooks sink out of reach of birds, and using devices to scare birds away from the fishing lines. These measures will govern fishing for tuna and tuna-like species in the Atlantic Ocean.

In December, the European Commission and 24 fishing nations that make up the Western and Central Pacific Fisheries Commission set technical specifications for the use of bird-scaring lines and other techniques that help fishermen avoid hooking seabirds by accident. Bird-scaring lines, also called tori lines, are streamers that hang from a line attached at the stern of a fishing vessel. They help prevent birds from reaching the bait when fishing lines are set in the ocean.

The negotiations in the Pacific were particularly significant for the United States because two of the three albatross species found in the North Pacific Ocean - the Laysan albatross and the black-footed albatross - breed on Hawaii. A third species affected by fishing lines — the short-tailed albatross — breeds in Japan and is found in U.S. waters. It is listed as endangered under the U.S. Endangered Species Act and there are only about 2,200 short-tailed albatross alive today.

“The fate of these vulnerable seabirds is important to the United States and to our longline fishermen, who, under U.S. law, are already taking significant precautions to avoid seabird bycatch.” said Lautenbacher. “We are pleased that some of the same effective measures will now be adopted by fishermen from many other nations.”

Measures similar to those adopted by the two international organizations have proven to be effective in international waters off Antarctica. Since they were adopted by the Commission on the Conservation of Antarctic Living Marine Resources in 1991, they have reduced the unintended catch of seabirds by a remarkable 90 percent. No albatrosses were unintentionally caught for the second consecutive year in 2007 in the regulated longline fisheries in these waters.

The National Oceanic and Atmospheric Administration, an agency of the U.S. Commerce Department, is dedicated to enhancing economic security and national safety through the prediction and research of weather and climate-related events and information service delivery for transportation, and by providing environmental stewardship of our nation's coastal and marine resources. Through the emerging Global Earth Observation System of Systems (GEOSS), NOAA is working with its federal partners, more than 70 countries and the European Commission to develop a global monitoring network that is as integrated as the planet it observes, predicts and protects.