How To Find A Plane At The Bottom Of The Ocean; 'They'll Have To Work With Flotsam' 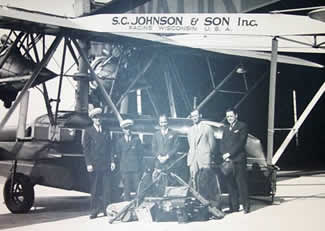 RACINE, Wisconsin -- SC Johnson Chairman and CEO Fisk Johnson announced success -- the wreckage of the original Carnauba airplane, a 1930s vintage aircraft that is a beloved icon of SC Johnson's early history, has been found off the shores of Manokwari Bay, Papua, Indonesia in 90 feet of water in a debris field.

After finding the plane, the Johnson family completed another dive and placed at site of the wreckage a granite plaque inscribed with the words: "I am Carnauba, my true home is not this bay but the hearts of all who love adventure." The stone symbolizes an important step in the long journey of the Carnauba and will serve as an inspiration to future divers.

On June 27th, Johnson and his family embarked on an expedition to search for the wreckage of the Sikorsky 38 (S-38) plane. Johnson's late grandfather H.F. Johnson, Jr. flew the legendary amphibious plane 15,000 miles to Brazil in 1935, searching for a sustainable source of wax -- the Carnauba palm tree.

After the expedition to Brazil, the plane was sold to a petroleum company and crashed off the coast of Indonesia shortly after takeoff during a flight in 1938. The pilot, not related to the Johnson family, swam to shore and survived but the plane was not recovered despite extensive searches including a 1997 Johnson family dive expedition.

"Seeing the original plane for the first time, resting deep under the ocean, was magical," said Fisk Johnson. "We've all dreamt of the moment that would finalize Carnauba's incredible journey. Now that it's here, words simply can't capture this experience. It was as if Dad was with us. We could feel his spirit and his love of adventure. At that moment, the past and the present met: one adventure coming to an end, and the promise of the next just beginning."

While plans for the wreckage have yet to be determined, Johnson has previously said that he hoped to be able to relocate part or all of it to the new building being constructed to honor his father. The building will display the replica Carnauba aircraft that Sam and his sons, Fisk and Curt Johnson, flew to Brazil in 1998 when retracing the famed 1935 adventure.