Study: Moles and Shrews Can Smell Underwater; 'Odorant Molecules are all Water Soluble' 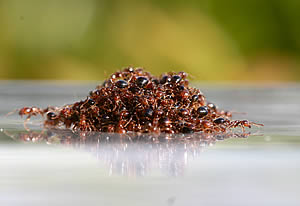 ATLANTA, Georgia -- It's a naturally occurring phenomenon that has puzzled biologists for decades: Place a single fire ant in water and it will struggle. But a group of fire ants will bind together and float effortlessly for days.

A paper describing the research, titled "Fire ants self-assemble into waterproof rafts to survive floods," was published April 25 in the early edition of the journal Proceedings of the National Academy of Sciences.

"It's a real thrill unraveling what at first looks like chaos," Tovey said. "To understand what the individual behaviors are and how they combine in order to achieve the function of the group is the central puzzle one encounters when studying social insects."

An individual ant's exoskeleton is moderately hydrophobic. But fire ants enhance their water repellency by linking their bodies together, a process similar to the weaving of a waterproof fabric, researchers said.

By freezing the ants, the Georgia Tech team observed that fire ants construct rafts when placed in water by gripping each other with mandibles, claw and adhesive pads at a force 400 times their body weight.

The result is a viscous and elastic material that is almost like a fluid composed of ant "molecules," researchers said. The ants spread out from a sphere into a pancake-shaped raft that resisted perturbations and submergence techniques.

To determine how this is possible, Tovey and the team tracked the ants' travel and measured the raft's dimensions. They found the ants move using a stereotyped sequence of behavior. The ants walk in straight lines, ricocheting off the edges of the raft and walking again until finally adhering to an edge, Tovey said. The ant raft is water repellent because of cooperative behavior.

The ant raft provides cohesion, buoyancy and water repellency to its passengers. Even more remarkable, it is self-assembled quickly, in less than 100 seconds. It is also self-healing, meaning if one ant is removed from the raft, others move in to fill the void.

"Self-assembly and self-healing are hallmarks of living organisms," Hu said. "The ant raft demonstrates both these abilities, providing another example that an ant colony behaves like a super organism."

The research could have application to logistics and operations research and material sciences, specifically the construction of man-made flotation devices. It also could impact the field of robotics, the team said.

"With the ants, we have a group of unintelligent units acting on a few behaviors that allow them to build complex structures and accomplish tasks," Mlot said. "In autonomous robotics, that's what is desiredâto have robots follow a few simple rules for an end result."