Florida Lab To Release Turtle After A Year Of Rehabilitation; 'We Like To Give Them A Little Base Tan Before They Go Back To Sea'

Cambodia: Extremely Rare Turtle Is Release To The Wild With Satellite Tag

NOAA Attempts To Charge Oceana 16k For Release Of Sea Turtle Records; 'It Is Unconscionable'

Sea Turtle 'Vicki Lee' Out Of Rehab, Released Back To Gulf Of Mexico With Satellite Tag 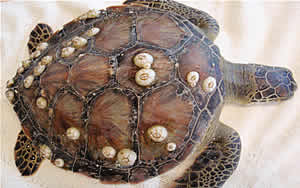 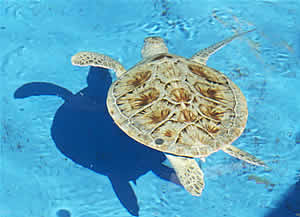 SARASOTA, Florida -- A green sea turtle will be released Friday from Lido Beach after nearly a year of care in Mote's Sea Turtle Hospital, which remains over-full due to a recent surge in turtle strandings. The 21-pound juvenile green sea turtle (Chelonia mydas), nicknamed Fisher, will be returned to the sea between 9 and 9:30 a.m. on April 16 near the lifeguard tower at the north end of Lido Beach.

Fisher was brought to Mote by members of the public after stranding in rough surf on Siesta Key on June 30, 2009. The turtle responded well to medical care, fluids and an appropriate diet, but Fisher had a persistent infection requiring antibiotics through mid-March, 2010.

Once the infection cleared up, all Fisher needed was a healthy tan - the turtle's long hospital stay had left its skin and shell light-colored, which could pose a problem in the wild.

"Green sea turtles can lighten up dramatically if they stay out of direct sunlight, and that leaves them vulnerable to sunburn," said Lynne Byrd, Mote's Animal Care Coordinator. "We like to give them a little base tan before they go back to sea."

Nine of Mote's current patients have fibropapillomas - a type of tumor caused by a virus that can disable or even kill sea turtles. Mote is one of only three facilities in Florida that can treat turtles with papilloma tumors.

Mote staff are still caring for several turtles stunned by January's unusually cold temperatures, which affected more than 4,500 turtles statewide, though most of Mote's cold-stunned patients have been released.

But several new patients have arrived since the cold weather abated, including six in March alone.

"The strandings we're seeing now may be caused by delayed effects of the cold weather," said Gretchen Lovewell, Manager of Mote's Stranding Investigations Program, a 24-hour response service for stranded or dead marine life in Sarasota and Manatee County waters.

The Program has responded to more than 90 reports of stranded or dead sea turtles so far in 2010, compared with 58 for all of 2009. "Turtles were likely debilitated by the cold, which could make it harder for them to bounce back if they have another health problem," Lovewell said. "We've also seen several turtles with injuries from boat strikes."

As weather warms, turtles may be more vulnerable to boat strikes as they float at the surface to bask in the sun. In addition, adult female sea turtles are now making their way toward southwest Florida shores for nesting season, which runs from May 1 to Oct. 31.

If you see a stranded or dead sea turtle, dolphin or whale within Sarasota or Manatee county waters, please call Mote's Stranding Investigations Program at 941-988-0212.

If you see a stranded or dead manatee anywhere in state waters or a stranded or dead dolphin, whale or sea turtle outside of Sarasota or Manatee counties, please call the Florida Fish and Wildlife Conservation Commission's Wildlife Alert hotline at 888-404-FWCC (3922).