Lifeguard: No Grudge Against Shark That Bit Off His Foot; 'He Got My Foot, I Got His Tooth' 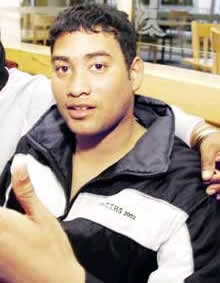 CAPE TOWN, South Africa -- Lifeguard Achmat Hassiem bears no grudge against the Great White shark that bit off his right foot in a deep-sea struggle off the Western Cape coast two weeks ago.

“He got my foot, I got his tooth. It’s only fair – we’re even,” quipped the bulky 24-year-old, holding up the broken point of a ragged-edged incisor doctors removed from his mangled lower-leg.

Hassiem appeared bemused by renewed calls for shark culling following his near-death encounter with a Great White off Sunrise Beach on August 13.

“You can’t kill something for just doing what it does,” he said. “You can’t blame them for what they are. They are a top predator. They don’t have hands to feel. They use their mouths to feel and, unluckily, as humans we bleed.”

Hassiem is one of seven people bitten by sharks off the Cape Town coast in the past five years, with another six attacks on small sea craft during the same period.

Three people died, including 77-year-old Tyna Webb, who was killed by a shark while swimming at Fish Hoek, also in False Bay, in November 2004.

Shark experts say there has been a rise in the number of attacks, but this must be seen against the background of more people going into the water.

Eight such incidents were reported between 2000 and 2005, translating into an average of 1,3 per year.

Recent shark “hype” in the local media was illogical if one considered these numbers, suggested Cliff.

“Thousands of people are killed on the road, but nobody stops driving.”

Putting up shark nets was not an option, he said, as they were very expensive, difficult to maintain, and indiscriminately killed sea animals. Culling was also not a solution, as Great Whites were a protected species.

Surfing events administrator Paul Botha disagrees. “Something needs to be done. There has been enough talking.”

He claims to have observed a huge increase in shark numbers in False Bay, something he blames on the Great White’s protected status combined with a food imbalance caused by over-fishing.

“We have created a problem. We have an over-population of sharks with not enough to eat.”

As solutions, he cited the introduction of a sonar system to alert swimmers of shark activity, or a “shark flying squad” to keep the fish under surveillance and kill aggressive ones.