Ocean Acidification: Another Undesired Side Effect Of Fossil Fuel-burning; 30 Years To 'Tipping Point' 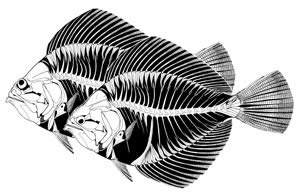 CHICAGO, Illinois -- A newly identified fossil and the reinterpretation of previously known fossils, all from Europe and about 50 million years old, fill in a "missing link" in the evolution of flatfishes and explain one of nature's most extraordinary phenomena.

All living flatfishes, which include halibut, flounder and sole, have a bizarre structural adaptation: both eyes are on one side of their head. What is even more remarkable is that every flatfish is born symmetrical, with one eye on each side of its skull. However, as it develops from a larva to a juvenile, it undergoes a metamorphosis where one eye moves (or "migrates") gradually up and over the top of the head, coming to rest in its adult position on the opposite side of the skull.

This unique specialization provides a clear survival advantage: it allows flatfishes to use both of their eyes to look up when they are lying on the seafloor. But scientists have had no idea how the forces of evolution gave rise to this curious structural adaptation because no fishes—living or fossil—with intermediate characteristics of this adaptation have ever been identified.

What might have led to this adaptation? What evolutionary advantage might intermediates have possessed? Many famous evolutionary thinkers, including Jean-Baptiste Lamarck, Charles Darwin, Alfred Russel Wallace, and Richard Goldschmidt, have had their say on this issue, but the new discoveries to be published in the journal Nature July 10, 2008, settle the matter.

"This problem of the evolution of asymmetrical flatfishes was particularly puzzling to biologists because it was very hard to explain what evolutionary forces might have led to this transition," said Matt Friedman, a research associate at The Field Museum, a graduate student at the University of Chicago and author of the study. "How can you arrive at the pattern seen in living flatfishes via gradual evolution? There seems to be no adaptive reason to start down the gradual evolutionary path toward the flatfish condition, because surely these intermediates would not have any kind of evolutionary advantage."

For this reason, flatfishes became a key example for a novel evolutionary argument that went like this: sometimes groups arise instantaneously from large-scale mutations that are usually deleterious but, under unusual conditions, might be adaptive. This "hopeful monster" scenario was invoked for flatfishes in the 1930s, and has been the popular perception of their origins ever since. But the new study in Nature, called "The evolutionary origin of flatfish asymmetry," determines that flatfishes are not "monsters" or mistakes, nor did their unusual body plan evolve suddenly.

Something old, something new

Typically, the undersides of flatfishes are white or pale, but their uppersides are camouflaged to fit in with the surroundings. Some species are able to change the color of their upperside. Weighing up to 720 pounds, these carnivorous bottom-feeders vary considerably in size from 4 inches to 7 feet. Many are important game and food fishes.

The Nature study examined several specimens of two kinds of fossil fishes from the Eocene (about 50 million years ago) of northern Italy. One of these is a newly described genus that Friedman has named Heteronectes (meaning "different swimmer"). He discovered it in a museum drawer at the Naturhistorisches Museum in Vienna, Austria.

The other fossil, Amphistium, is known from several specimens from the same Italian site as Heteronectes and a single fossil from France. It has been known to science but incorrectly classified for more than 100 years. All previous studies of Amphistium mistakenly concluded that it had a symmetrical skull.

Examining the anatomy of Amphistium and Heteronectes with a diverse range of techniques (including CAT scanning and chemical preparation, which dissolves the rock surrounding the fossil skeleton), Friedman discovered that both represent primitive flatfishes with a somewhat asymmetrical skull. Nevertheless, in both cases the eyes remain on opposite sides of the head in adults. In other words, the fossils show incomplete asymmetry, displaying an intermediate condition between what is found in ordinary symmetrical fishes and extraordinary asymmetrical flatfishes.

This discovery rejects the notion that flatfishes must have arisen suddenly as "hopeful monsters" and documents two steps in the gradual assembly of one of the most bizarre body plans found among vertebrates. The position of Amphistium and Heteronectes within the fish evolutionary tree is confirmed by many aspects of their anatomy. Features unrelated to asymmetry link these fossils with flatfishes, but the specimens also show characters more primitive than those found in any living form.

Adding a further twist to the story, the right eye migrated in some specimens of Amphistium, while the left eye moved in other specimens. This is unlike most living species of flatfishes, where individuals are always right- or left-eyed. It also indicates that that mixed 'handedness' is primitive for flatfishes.

"There is a broad implication for the tempo and mode of evolution here," Friedman concluded. "Scientists had long assumed flatfishes must have arisen suddenly because they could not imagine the adaptive significance of intermediates, but this work delivers clear evidence that such intermediates did exist, and therefore, that flatfish asymmetry arose gradually."

The fossils described in Nature give clues to the lifestyle of these primitive flatfishes and the possible evolutionary forces that might have led to their bizarre anatomy. One specimen of Amphistium preserves the remains its last meal in its stomach: a fish nearly half its own length.

"It is certain that these extinct fishes were predators," Friedman said. "Many flatfishes lie in wait on their sides to ambush unsuspecting prey, but they don't always lie flat—they often prop themselves above the seafloor with their fins. It's possible that Amphistium and Heteronectes did the same, and that even incomplete asymmetry would have given them a better view of things above and around them than no asymmetry at all."