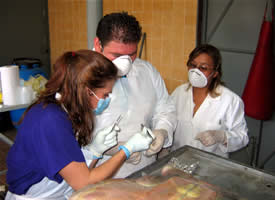 SAN SALVADOR, El Salvador -- A “Red Tide” event that occurred off the coast of El Salvador late last year directly caused the deaths of some 200 sea turtles, according to test results released today by the Wildlife Conservation Society (WCS) and other organizations.

Responding to requests from the Salvadoran government and the US Agency for International Development (USAID) for assistance, WCS veterinary pathologist Dr. Julie White journeyed to the southern coast of El Salvador in January to help determine why these ocean-going reptiles—mostly olive ridley turtles and a few green and hawksbill turtles—were dying in such high numbers. Tissues collected from dead turtles, and analyzed by both U.S. biologists and researchers from the Mexican Autonomous University, revealed the culprit: saxitoxin, which is produced by the species of algae and sea plankton that cause the phenomenon known as “Red Tide.”

“The rapid response and subsequent diagnosis in this outbreak demonstrates the power of collaboration among governments and non-governmental organizations,” said White, who collected tissue samples in January. “We are still testing samples from other turtles that died during this period, but we can say with some certainty that Red Tides first reported in November resulted in widespread sea turtle mortality.”

The first reports of these deadly algal blooms came in November along El Salvador’s southern coast, followed by reports of humans becoming sick. This was followed by the closure of shellfish beds in the area, a warning from the government against eating shellfish from affected areas, and the first instances of dead and dying sea turtles washing up on shore were reported in the second week in December. Dr. White then performed post-mortem examinations on one of the turtles, while simultaneously training Salvadorian colleagues in tissue collection techniques. Samples were then sent to Florida’s Fish and Wildlife Research Institute, where technicians then found high levels of saxitoxin, which affects the nervous systems of humans and animals alike. Since then, no further deaths of large numbers of sea turtles have been reported from El Salvador, although a similar sea turtle die-off was reported in Panama in early February. In El Salvador, the levels of toxins in shellfish have decreased but are high enough to maintain the ban on harvesting shellfish.

Red Tide events have become increasingly common around the world, causing significant impacts on wild marine animal populations, massive economic losses to shellfish producers, and occasionally human deaths. While the algal blooms are a natural occurrence, human wastes such as run-off containing fertilizers and sewage from urban areas have been postulated as triggers for these events.