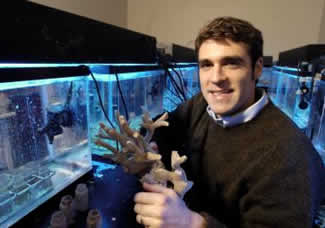 BALTIMORE, Maryland -- Leopards may not be able to change their spots, but corals can change their skeletons, building them out of different minerals depending on the chemical composition of the seawater around them.

That's the startling conclusion drawn by a Johns Hopkins University marine geologist, writing in the July issue of the journal Geology.

Postdoctoral fellow Justin Ries and his collaborators say this is the first known case of an animal altering the composition of its skeleton in response to change in its physical environment. The aquatic animal's sensitivity to such changes poses questions about its evolutionary history, as well as the future of the ecologically important coral reefs that it builds, Ries said, especially at a time when seawater is changing in response to global warming and the buildup of carbon dioxide in the atmosphere.

A 2005 Ph.D. graduate of Johns Hopkins, Ries collaborated on the research with his dissertation advisors, Steven M. Stanley (now of the University of Hawaii) and Lawrence A. Hardie, professor in the Morton K. Blaustein Department of Earth and Planetary Sciences at Johns Hopkins.

Reefs are large underwater structures of coral skeletons, made from calcium carbonate secreted by generation after generation of tiny coral polyps over sometimes millions of years of coral growth in the same location. The team showed that corals can switch from using aragonite to another mineral, calcite, in making the calcium carbonate. They make that switch in response to decreases in the ratio of magnesium to calcium in seawater, Ries said. That ratio has changed dramatically over geologic time.

"This is intriguing because, until now, it was generally believed that the skeletal composition of corals was fixed," he said.

Ries spent two months growing three species of modern scleractinian corals (the major reef-building corals in today's seas) in seawater formulated at six different chemical ratios that have existed throughout the 480-million-year history of corals. He concocted this "artificial seawater" using "recipes" provided by Hardie, who several years ago discovered that the magnesium-calcium ratio in seawater has vacillated throughout geologic history between a low of 1.0 and today's 5.2, changing due to chemical reactions between seawater brine and rising magma along the ocean floor.

Ries placed his artificial seawaters in 10-gallon glass tanks, then added fragments of the three species of Caribbean reef-building corals. These were replete with colonies of polyps, which had spent the previous month in "equilibration tanks." Ries adjusted the chemistry of those tanks over 30 days, until their magnesium-to-calcium ratios were in line with the prescribed "ancient seawater" chemistries.

Two months later, Ries removed the coral skeletons and used X-ray diffraction to analyze their mineral composition. He was surprised to find that corals grown in the artificial seawater with a magnesium-to-calcium ratio less than 2-to-1 began producing a large portion of their skeleton with the calcite mineral, while those grown in unmodified modern seawater produced exclusively the aragonite mineral.

Though most scientists believed that corals were programmed to produce only the aragonitic form of calcium carbonate, he said, the team's work reveals that corals are far more flexible and able to vary at least a portion of their skeleton to growth favored by seawater chemistry. He postulates that this "mineralogical flexibility" provides corals with an "evolutionary advantage," as it would take more energy for corals to produce skeletons that are not favored by the chemistry of the seawater surrounding them.

"The reduction in the corals' rate of growth that accompanied their exposure to the chemically modified seawaters is further evidence of corals' extreme sensitivity to environmental change," Ries said.

"This is particularly significant given recently observed and predicted future changes in the temperature and acidity of our oceans -- via global warming and rising atmospheric CO2, respectively -- that will presumably have a significant impact on corals' ability to build their skeletons and construct their magnificent reefs," he said.

Corals are crucial to nearshore tropical ecosystems because the reefs they build are inhabited by tens of thousands of marine animals, plants, algae and bacteria that make up the coral reef ecosystem, which is one of the planet's most diverse, Ries said. But coral reefs also serve a more practical purpose: They absorb wave energy generated by hurricanes and other severe tropical storms.

"Ironically, the same factor that is likely causing such storms to increase in intensity â global warming â is also causing the corals to bleach (lose their symbiotic algae) and die, ultimately leading to the destruction of the coral reefs, which protect the coasts from these storms," Ries said. "All that being said, it is also important to note that the magnesium-calcium ratio of seawater changes only over millions of years and has no direct relationship to recent global warming and ocean acidification, which are believed to be at least partly human caused."

His team's experiments do, however, have significance with respect to global warming and ocean acidification, Ries said, because they reveal that although corals can adapt mineralogically to altered seawater chemistry, doing so slowed the corals' rate of growth by nearly 65 percent.

"This provides us with further evidence that corals are extremely sensitive to rapid environmental change, such as global warming," he said.