Gift Of Caviar May Be Product Of Endangered Species' Illegal Harvest; 'The Pressure To Act Is Increasing' 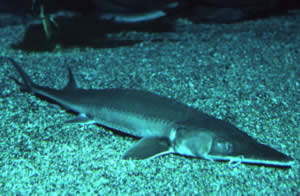 A new study suggests that pallid sturgeon have been illegally harvested over the years for their eggs.

COOKEVILLE, Tennessee -- Tennessee Tech University professor and U.S. Geological Survey researcher Phil Bettoli and colleagues accompanied commercial fishermen in Tennessee during the 2007 fishing season and estimated that hundreds of large, mature pallid sturgeon have been illegally harvested in recent years for their eggs, which are highly valued as caviar, according to a recently released report that will appear in February in the Journal of Applied Ichthyology.

“Researchers who have studied pallid sturgeon and sought ways to prevent the species from going extinct have long suspected that illegal fishing was undermining government efforts to save the species,” explained Bettoli.

Commercial fishermen are not necessarily targeting pallid sturgeon, one of the largest and most primitive fish plying the Mississippi River basin. Instead, they target the smaller, more numerous shovelnose sturgeon, a closely related species that can be legally harvested for its caviar.

Unprocessed shovelnose sturgeon eggs fetch more than $100 per pound, and the processed caviar is subsequently sold for $12-21 per ounce.

However, the two species share some of the same habitats and are notoriously difficult to tell apart in the field. Definitive identification requires DNA analysis or sophisticated statistical models to analyze external anatomy.

Bettoli and colleagues at Tennessee Tech and Southern Illinois University do not claim that pallid sturgeon face extinction in Mississippi River waters. But they did publish conclusions that could affect the shovelnose sturgeon caviar fisheries, which in Tennessee can range as high as $200,000 a year in value.

“Allowing the harvest of pallid sturgeon to continue is inconsistent with the long running, extensive recovery efforts undertaken by state and federal agencies stretching from Louisiana to Montana, costing millions of dollars annually,” said Bettoli.

In addition, the researchers got a glimpse of a poorly documented phenomenon: ghost nets. These lost nets keep catching and killing fish for years and have been recognized as a serious threat to sturgeon recovery efforts along the Atlantic and Pacific coasts. Tennessee sturgeon fishermen admitted that losing nets is not uncommon when fishing the Mississippi River.

Based on these and other findings, the U.S. Fish and Wildlife Service is considering whether to step in and close all sturgeon fishing in the Tennessee waters of the Mississippi River under the Similarity of Appearance clause of the Endangered Species Act.

“The pressure to act is increasing because the worldwide demand for caviar is high (as are the prices the eggs fetch), domestic and foreign supplies of caviar are shrinking, and pallid sturgeon are still a long way from ever making it off the endangered species list,” said Bettoli.