Death on a Plate: The Deadly Blowfish Could Be Your Last Meal in Tokyo 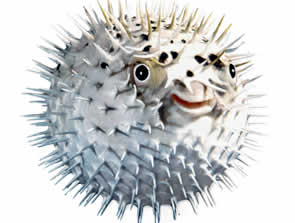 The blowfish, known in Japan as fugu, is a potentially deadly culinary delicacy

TOKYO, Japan -- ACT: Eat the wrong part of a blowfish and you can die within hours.

Death on a plate arrives in so many shapes and textures and pretty arrangements that for a moment I forget this meal can kill me.

But soon my mind snaps back to attention. On the second floor of the Tokyo restaurant Tentake, I inspect a marinated lump of fish topped with a hot pepper-radish sauce, grab it with my chopsticks and, with a quick internal prayer and my mother's pleading admonitions in my ear, take my life in my hands. I have a bite. ...

The name alone strikes fear into Americans, and for good reason. Blowfish contains tetrodotoxin, a potent neurotoxin that shuts down electrical signaling in nerves and kills within hours. But to the Japanese, blowfish, known here as fugu, is a culinary delicacy, a pricey meal to be enjoyed during special occasions — say, a goodbye party for a friend or an outing with coworkers.

I first ate fugu during a year teaching English in Hiroshima, when I was invited to a teachers' party. My mother, when I told her of the pending outing, begged me over the phone not to attend. "Can't you just sit there and, uh, watch?" she asked.

By the time I arrived at the hotel, most of my fellow teachers already were tipsy on sake and beer and, when I voiced objections to eating fugu, they looked at me with a mix of scorn and pity. With a strange lightheadedness, I sat down and proceeded to sample one dish after another. Fugu wasn't the main course, it was the only course: raw, boiled, fried, marinated.

To the relief of my mother, but perhaps not my students, I survived — and vowed to someday try fugu again.

Tokyo has by some accounts between 700 and 800 certified blowfish restaurants, and I don't use the word "certified" lightly. At Tentake, one needed look no further than the walls to see framed certificates for eight chefs who had passed a rigorous licensing exam to prepare and serve the fugu courses.

A few days before my meal, I was permitted as a journalist to observe a training seminar at Tokyo's famed Tsukiji fish market for apprentice chefs learning to dissect the fish and remove the poison, carefully discarding the remains in special bags that are sent to a central incinerator.

The fugu house is a nondescript white building deep in the bowels of the market. A red-lettered sign on the door warns of the danger inside.

Upon entering, you are surrounded by knives — and poison. A dozen young apprentices dressed in white smocks and hats are learning to dissect the fugu under the attentive gaze of a half dozen middle-aged instructors. Two health inspectors observe silently from one corner. In another, fugu wholesalers association union director Katsuhiko Iizuka, 75, a good-humored man with thick dock-worker hands, sits on a stool smoking Caster cigarettes.

Iizuka gives me a brief overview. Aspiring chefs may train at a restaurant under a licensed chef. But to break out on their own, trainees must safely dissect a fish, labeling its edible and poisonous organs and preparing the meat and skin to

Any mistakes and they are sent back to try again.

It's not easy. The most deadly organs are the female's ovaries, but the male's testicles, which look almost identical, are a delicacy.

"If you mix it up, you definitely fail the test," Iizuka tells me with a chuckle. Last year, 830 people applied for a fugu license in Tokyo, Iizuka says, but only 500 passed the exam.

Most fugu deaths are the result of fishermen attempting to prepare a meal themselves.

Standing in the damp fugu house, watching the apprentices remove the organs and place them on one of two trays — edible and inedible — and then attach plastic yellow identification labels to each organ, I begin to feel squeamish.

A week later, I'm sitting with Iizuka and my friend Junya Sugawara at a table in Tentake, preparing for the moment of truth.

Iizuka has changed out of his smock and donned a pinstriped blue suit for the occasion.

Fugu is expensive, but I've asked Iizuka to take us to a moderately priced place. At Tentake, a fugu set course can range from about $40 per person to about $100. We settle on the $60 course.

There is no warm-up act for fugu. The waitress immediately delivers small bowls of boiled fugu marinated in vinegar and topped with daikon radish-hot pepper sauce, which I am instructed to dip in a mixture of Welsh green onion, seaweed and soy sauce.

I take my first bite. Fugu is a white fish, dense and substantial. As I chew, I think about the poison and the risk. But then I notice: Fugu, ironically, has a reputation as bland-tasting, and in this incarnation, I must admit, it tastes almost like chicken. It's not the fish but the hot pepper sauce that bites.

There's little time to ruminate. Out from the kitchen, in quick succession, come: raw fugu, cut so thin as to be transparent in color; slightly pan-seared fugu whose edges are dark but inside is raw, atop a salad of lettuce, corn, daikon and carrot; and fried fugu, served hot with the bone inside and garnished with paprika and a slice of lemon.

The raw fugu is a bit too rubbery for my taste, but the fried dish is flaky with a nice crunch.

For the final course, the waitress places a hot pot in front of us and hands us a plate of raw fugu, tofu and vegetables that we dip into the boiling water briefly with chopsticks. This is known as shabu-shabu, and if you don't finish everything, don't fear: The rest of the broth is sopped up with rice, topped with a runny egg and served as a stomach-bursting risotto-like finale.