Geologists: El NiÃ±o And African Monsoon Have Strongly Influenced Intense Hurricane Frequency In The Past 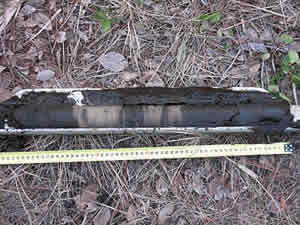 This is a sediment core sample collected in a laguna along the Florida Panhandle. Credit: Jon Woodruff

UNIVERSITY PARK, Pennsylvania -- For many Americans who live on the Atlantic coast, Andrew, Ivan and Katrina are more than just names--they are reminders of the devastating impact of cyclonic activity in the region during hurricane season. If it seems like hurricane seasons have been more active in recent years, you're on to something. According to a paper published in the August 13 issue of Nature, the frequency and strength of these powerful storms has grown in recent decades.

"We are at levels now that are about as high as anything we have seen in the past 1,000 years," said Michael Mann, director of the Earth System Science Center at Pennsylvania State University and the lead author of the paper. Mann and his collaborators, Jeffrey P. Donnelly of the Woods Hole Oceanographic Institution, Jonathan D. Woodruff of the University of Massachusetts and Zhihua Zhang of Pennsylvania State University examined sediment samples from across the North Atlantic coast and statistical models of historic hurricane activities.

Their analysis allowed them to measure the severity of hurricane seasons over the past 1,500 years. The sediment samples match up relatively well with the computer models, both of which show a period of high activity around 1,000 AD, followed by a lull in activity. This medieval peak rivals and possibly exceeds the level of activity seen in recent decades.

The study also adds validity to the theory that two factors fuel higher hurricane activity, namely the La NiÃ±a effect and high surface temperatures over the ocean. If climate change continues to warm ocean waters, Mann said, it could lead to more active hurricane seasons. This hurricane season, which has yet to see a named storm, is lighter than usual, Mann said, because of the El NiÃ±o effect, which is believed to have the opposite effect of La Nina patterns.