Lights Out On Florida Beaches As Turtle Nesting Season Kicks Off; 'Just One Light Can Kill Thousands'

Strong 2012 Nesting Season For Florida Loggerheads; 'Nesting Has Risen Over The Past Five Years' 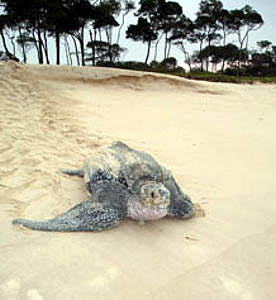 EXETER, UK -- An international team of scientists has identified a nesting population of leatherback sea turtles in Gabon, West Africa as the world's largest.

The research, published in the May issue of Biological Conservation, involved country-wide land and aerial surveys that estimated a population of between 15,730 and 41,373 female turtles using the nesting beaches.

The study highlights the importance of conservation work to manage key sites and protected areas in Gabon.

The research was led by the University of Exeter working in collaboration with the Wildlife Conservation Society (WCS) which spearheads the Gabon Sea Turtle Partnership, a network of organisations concerned with the protection of marine turtles in Gabon

During three nesting seasons between 2002 and 2007, the team’s members carried out the most comprehensive survey of marine turtles ever conducted in Gabon. This involved aerial surveys along Gabon’s 600 km (372 mile) coast, using video to capture footage for evaluation, and detailed ground-based monitoring. By covering the entire coastline, they were not only able to estimate the number of nests and nesting females, but also to identify the key sites for leatherback nesting, data which are crucial to developing conservation management plans for the species. Leatherbacks were first described nesting in Gabon in 1984.

Lead author on the paper, Dr Matthew Witt of the University of Exeter's School of Biosciences, said: “We knew that Gabon was an important nesting site for leatherback turtles but until now had little idea of the size of the population or its global ranking. We are now focusing our efforts on working with local agencies to coordinate conservation efforts to ensure this population is protected against the threats from illegal fisheries, nest poaching, pollution and habitat disturbance, and climate change.”

The study also revealed that around 79 percent of the nesting occurs within National Parks and other protected areas. This gives added hope that Gabon can continue to be one of the world’s most important countries for these magnificent creatures.

Dr Angela Formia of the Wildlife Conservation Society, a co-author of the paper, said: “These findings show the critical importance of protected areas to maintain populations of sea turtles. Gabon should be commended for creating a network of National Parks in 2002 that have provided a sanctuary for this endangered species as well as other rare wildlife.”

To see turtles currently being tracked from Gabon see: www.seaturtle.org/tracking/?project_id=340