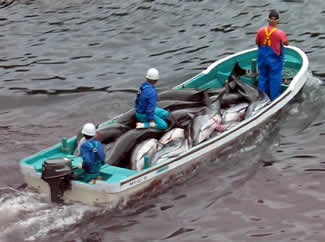 Dead striped dolphins in a boat 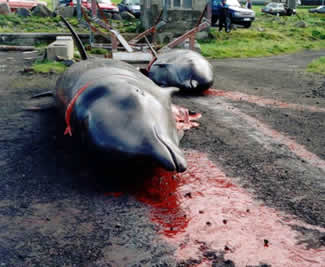 PROVIDENCE, Rhode Island -- s the annual dolphin drive hunts begin in the Japanese villages of Taiji and Futo, a consortium of scientists and zoo and aquarium professionals has launched a campaign to end the practices through public awareness and by appealing to the government of Japan to put an end to the hunts. The "Act for Dolphins" campaign--which includes members from The New York Aquarium, Emory University, and the World Association of Zoos and Aquariums (WAZA) --maintains that the hunts, which result in the deaths of thousands of dolphins every year, are inhumane by any ethical standard and should be discontinued immediately.

Occurring annually from September to April, the dolphin hunts are regulated by the Japanese government and conducted by groups of fishermen who herd hundreds, sometimes thousands, of dolphins and small cetaceans into shallow bays by banging on partially submerged rods that create a sonic barrier. The dolphins are then corralled into nets and dispatched in a brutal manner: speared, hooked, hoisted into the air by their tails, and finally eviscerated alive. The methods, say researchers, result in a long and painful death for these intelligent marine mammals.

The Japanese government has made the unsupported claim that the animals compete with local fishermen for limited supplies of fish and that the drives are in fact a means of pest control. Also, the "Act for Dolphins" consortium maintains that, in spite of the fact that the hunting of dolphins and use of their meat has waned in popularity, the government is actually encouraging the public to consume more dolphin meat; in addition to human consumption, dolphin meat is also used as pet food and fertilizer. The drive hunts also result in the capture of live dolphins for aquariums and interactive swim programs in Japan and China, in direct violation of the Code of Ethics maintained by WAZA.

"The Japanese dolphin drive hunts are an abominable violation of any standard of animal welfare, and these hunts inflict measurable pain and suffering on animals that are intelligent, sentient, and socially complex," said Dr. Diana Reiss, Senior Research Scientist and Director of the New York Aquarium's Marine Mammal Research Program.

The "Act for Dolphins" campaign involves scientists and veterinarians from the New York Aquarium, Emory University, the School of Medicine at the University of San Diego, Dalhousie University, the University of Hawaii, the University of Notre Dame, and professionals from the World Association of Zoos and Aquariums (WAZA) and the Association of Zoos and Aquariums (AZA). The immediate goals of the campaign are to raise public awareness of the dolphin drive hunts , to boost measurable support through the group's website petition (www.actfordolphins.com) which currently includes over 22,000 signatures, and to convince the Japanese government to end the hunts on ethical grounds.

According to the group, the ethical argument for ending the drive is supported by a solid foundation of scientific evidence indicating that dolphins possess the mental and emotional capacities for pain and suffering on a par with great apes and humans. It is also increasingly clear that dolphins have social traditions and cultures, complex interdependent relationships, and strong family ties all of which are susceptible to disruption or even dissolution in the drives.

"The scientific evidence is abundantly clear--the Japanese dolphin hunts are an assault on intelligent, sentient, and emotional beings with brains that should make us all stop and think" said Dr. Lori Marino, Senior Lecturer in Neuroscience and Behavioral Biology at Emory University.

Most of the species are included on the World Conservation Union's Red List of Threatened Species. Also, the hunts have resulted in growing criticism from relevant management organizations on both conservation and welfare grounds, including the International Whaling Commission (IWC), the treaty organization that regulates the hunting of the great whale species.