Sea Algal Antifreeze Makes Inroads Into Ice; 'Productivity Is Expected To Increase In A Warming Climate' 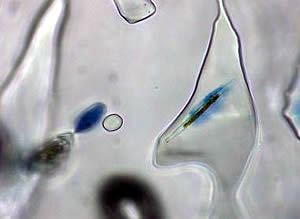 Inside an ice pore, gel-like mucus (stained blue to be visible) clings to an individual diatom of sea-ice algae. Credit: Christopher Krembs

SEATTLE, Washington -- Sea-ice algae â the important first rung of the food web each spring in places like the Arctic Ocean â can engineer ice to its advantage, according to the first published findings about this ability.

The same gel-like mucus secreted by sea-ice algae as a kind of antifreeze against temperatures well below minus 10 C is also allowing algae to sculpt microscopic channels and pores in ice that are hospitable to itself and other microorganisms.

Altering ice to their benefit should help sea-ice algae adapt to a warming world, which is good news for hungry fish and shellfish farther up the food web, but what it means for the integrity of the ice itself raises unanswered questions according to Jody Deming, University of Washington professor of oceanography and co-author of a paper appearing in the March 1 Proceedings of the National Academy of Sciences.

Ice riddled with more channels and pores will be weaker, yet such openings plugged with algal secretions actually hold more salty water and thus may slow melting in the spring and summer, she says. Scientists have yet to determine if the two processes cancel each other or if one will dominate, say Deming and co-authors Christopher Krembs, Washington State Department of Ecology, and Hajo Eicken, University of Alaska Fairbanks.

Sea ice is home to microscopic plants and animals, bacteria and viruses that stay alive in brine-filled openings in the ice. The gel-like mucus secreted by ice algae and other microorganisms, called extracellular polysaccharide substances, consists of complex sugar compounds. The mucus depresses the freezing point and keeps pore spaces in ice filled with at least some liquid.

The researchers focused on the algae that dominate the sea-ice biota across the Arctic each spring and in particular the variety Melosira arctica. Individually, Melosira arctica are about 50 micrometers long, or the width of a strand of human hair. Joined together, however, they form filaments that are meters long. Under-ice divers witness great forests of the algae hanging underwater from the sea ice each spring, Deming says.

Once considered minor contributors to the food web, sea-ice algae are gaining respect, Deming says. They bloom first in the spring and are responsible for nearly 60 percent of the primary production in ice-covered water at that time of year. As ice melts, creating open water, other microorganisms come to dominate primary production but Melosira arctica and brethren get credit for kick-starting the growing season.

Faced with a warming world, some scientists speculate that the importance of sea-ice algae, even in the spring, will diminish.

That may not be the case according to the new findings. In lab work, for instance, Deming and her co-authors found mucus from ice algae increased ice salinity by up to 59 percent and increased the number and complexity of channels. That means more places in the ice for algae to live where they can receive sunlight and avoid being eaten. The channels also retain more iron, nutrients and carbon dioxide needed for algal growth.

"Sea-ice primary productivity is expected to increase in a warming climate until the nutrient supply from below becomes limiting," the PNAS paper says. The work was funded by the National Science Foundation.