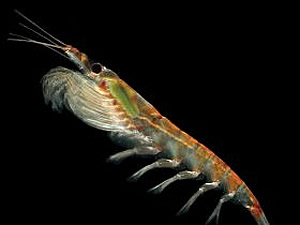 KINGSTON, Tasmania -- In a world first, the sex life of Antarctic Krill in the wild has been caught on camera revealing the shrimp-like creatures are able to mate deeper in the ocean than previously thought.

Scientists from the Australian Antarctic Division have used a deep-sea video camera to film swarms of krill 700 meters below the surface of the Southern Ocean off East Antarctica.

Krill Biologist, Dr So Kawaguchi, said the footage had revealed some surprising aspects of the private lives of krill.

"Up until now it was thought krill only lived and mated in the surface layer of the ocean, from 0â200 meters, but what this video shows is they are also inhabiting and mating in much deeper water," Dr Kawaguchi said.

The camera was deployed between 400â700m at 16 stations off East Antarctic in January last year. At 14 of these, krill were seen in high densities.

"After trawling through hours of video we noticed in one segment, filmed at 507 meters depth, a frenzied twirling of three krill, which turned out to be two males pursing one female," he said.

"The whole mating ritual only lasted 12 seconds and had five distinct phases which we've labeled the 'chase', 'probe', 'embrace', 'flex' and 'push'."

Krill are the centerpiece of the entire Antarctic food chain, serving as both important grazers and critical prey species for whales, seals and seabirds.

"This research challenges previous ideas on the life cycle of krill and will have considerable implications for understanding the Antarctic marine ecosystem and for the management of the krill fishery," Dr Kawaguchi said.

The research paper has been published online in the international scientific journal, Journal of Plankton Research, today.