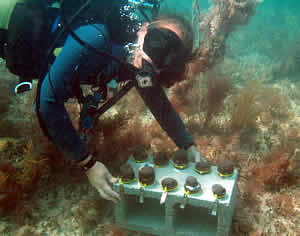 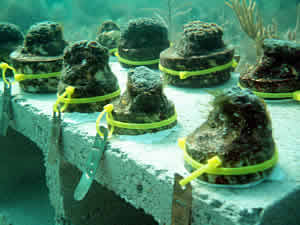 On Wednesday, Oct. 13, scientists with Mote Marine Laboratory released corals of four species at two sites in the Florida Keys National Marine Sanctuary. The release, permitted by Sanctuary officials and Florida Fish and Wildlife Conservation Commission, is designed to test the feasibility of using corals grown in land-based raceways and recirculating tank systems to restock damaged or depleted reef sites.

One of the release sites chosen was a site Mote is using as a coral nursery for the threatened stagorn coral. The second site was chosen because it was especially hard hit by the record cold temperatures that caused a rare coldwater bleaching event in January of this year.

"Now is an especially good time to do this study because of the cold snap in January," said Dr. Kevan Main, director of Mote's Center for Aquaculture Research and Development, which reared the coral fragments in partnership with Mote's Center for Coral Reef Research at Mote's Tropical Research Laboratory on Summerland Key. "During that cold event, many of the fragmented corals growing at the inshore release site were lost. This gives us an opportunity to see whether we can jump start the recovery of corals at this site with cultured fragments."

Unlike the corals that Mote grows at Sanctuary nursery sites in the Lower Keys — which are grown for study and possible later outplanting in other reef locations — the corals "released" Wednesday are situated in their final location. "This is a permanent transplant," Main said. About the release:

The corals will be checked and cleaned every two weeks and monitored for growth quarterly. A second release is planned for the spring.

"Coral reef restoration is a key element of the Protect Our Reefs Program," said Dr. Dave Vaughan, director of Mote's Center for Coral Reef Research. "We hope this release will be successful and will help guide future restoration efforts with some the Keys' threatened elkhorn and staghorn coral species."

Other supporters include the Ocean Reef Foundation and the Rod & Gun Club.