Researchers: Fish Become Wary Of Spearfishermen; 'The Fish Tended To Move Off' 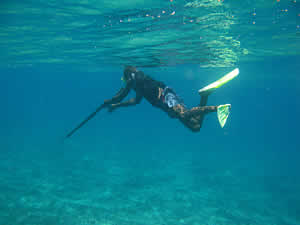 Fish are not as dumb as people sometimes think: marine scientists have found that fish that are regularly hunted with spearguns are much more wary and keep their distance from fishers.

In investigating the effects of marine areas closed to fishing by customary laws, an international team of researchers working in the Pacific found that fish exposed to speargun fishing take flight much earlier when a diver approaches compared with those living in protected zones.

To assess the effectiveness of marine protected areas and their effects on fish behaviour, the team decided to measure 'flight distance' in a range of coral reef fishes which are popular targets for local fishermen in the study area in Papua New Guinea.

"We were studying the effect of the customary reef closures which many groups in the Pacific use," explains team member Fraser Januchowski-Hartley of the ARC Centre of Excellence for Coral Reef Studies at James Cook University and the Wildlife Conservation Society.

"In developed countries marine areas closed to fishing are a fairly recent idea â€" but in the Pacific islands, people have been using them for generations, for traditional reasons."

One of the issues the team was interested in was whether the existence of a closed area changed the behavior of the fish inside it, compared to the behavior of fish outside the area.

Their study took place at Muluk in Papua New Guinea where the local chiefs close areas of reef to fishing, sometimes for several years at a time, whenever it seems the fish are becoming a bit shy. The study looked at fish traditionally hunted by the local people including snappers, triggerfish, parrotfish and surgeonfish.

"Fish which are regularly targeted appeared to have a pretty fair idea of the 3m range of the typical rifle-style speargun used by the local PNG fishers", explains lead author Dr David Feary of University of Technology Sydney (UTS).

"Quite simply, the fish in areas that were fished regularly were warier and stayed further away- just far enough that it would be difficult to hit them with the spear gun technology used locally"

In the most extreme case, fish in unprotected areas had a flight distance 2.6 meters greater than the same species of fish in a protected zone â€" putting them well outside the range of the spear.

However when an area was closed, the fish appeared to recover their confidence, allowing divers to approach much closer â€" within speargun range when the area was reopened for fishing.

Feary explains "Sometimes these types of closures are used to create a 'bank account' of resources that are saved up for important cultural ceremonies. It seems that by closing the area off, communities may not only build up the amount of fish in the area, but make them easier to catch, which helps meet the goal of having fish for a feast. But this may pose a problem where temporary closures are used for conservation rather than community goals."

"Our results highlight a previously unconsidered mechanism through which a rapid and large decline in fish biomass may occur when a closed area is reopened to fishing; reduced flight distance resulting from protection may increase some fish species' susceptibility to spear fishing," Januchowski-Hartley cautioned.

They argue that while temporary closures have value in conserving fish stocks and helping them to recover, their effect on fish behavior may have to be factored in when reserves are reopened, if the aim is to preserve fish stocks. This may entail the use of gear-restrictions or short re-openings to avoid a sudden, heavy kill of larger fish which have become accustomed to the relative safety of a closed area.