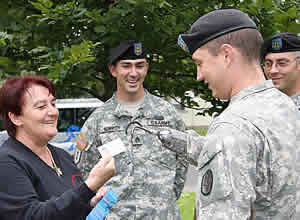 "This was something I always wanted to do my entire life," said Spc. Altman, a Soldier injured by an improvised explosive device during Operation Iraqi Freedom 06-08, now a certified diver.

"This assured me that I'm capable of doing things and that I'm not limited by the injuries I have," said Sgt. Fowler. "What most people consider handicaps, I now consider as new challenges to face."

Organizers said that the scuba classes were designed to help improve the lives of injured veterans returning from Iraq & Afghanistan.

The program was modeled after the Soldiers Undertaking Disabled Scuba (SUDS) program at Walter Reed Army Medical Center and National Naval Medical Center at Bethesda, according to Staff Sgt. Stephen Gagne who, along with Staff Sgt. Josh Kennedy-both divers and WTB-E cadres-breathed life into the program months ago.

"We kicked around the idea of having a SUDS program here in the summer of 2009," Gagne said. "Unfortunately, we had to do this from the ground up."

The wounded Soldiers' first dives came in the early spring of 2009. Actual certification, however, was met head on with more setbacks such as funding, according to Gagne.

"One of the hardest things about the program was finding a dive school that was willing to bend to the needs of the Soldiers," said Jeff Franklin, a disabled veteran and diver who put the cadres in touch with a local dive school willing to work with the Soldiers' schedule and disabilities.

Gabbi Knorr, a certified dive instructor and owner of her own shop in Schweinfurt, instructed the Soldiers.

"It was very different," she said regarding her time in the water with the wounded Soldiers. "We had to be careful with different injuries which we had to overcome. We had to be creative and we did that with special equipment like special fins."

Despite the obstacles, time beneath the water proved well worth the effort.

"The most impressive thing I've witnessed is the families coming back together," added Franklin. "It's turned into a family-orientated event."

"It's absolutely been therapeutic, said Sgt. 1st Class Strickland. "It's a tranquil and peaceful experience. When you're under water you don't hear anything except the bubbles coming out of your regulator. And it really puts you at ease and calms you down. You become one with your surroundings."

Cathy Foley agrees. She is a counselor at the Schweinfurt garrison with a professional background in the treatment of post-traumatic stress disorder. The wounded Soldiers that she has spoken with have indicated a positive reaction to the solace provided by the water.

"Anytime you have someone who has been through trauma and their life has been disrupted and you add positive recreational activities, it encourages the healing process," Foley said. "So scuba diving is an opportunity to engage with others without warrior concerns."

"Healing begins and empowerment begins. You're making them strong again," said Foley. She also said something that may provide insight into the healing powers of water: "Water is tranquil and provides support," she said. "We're all equal in water."