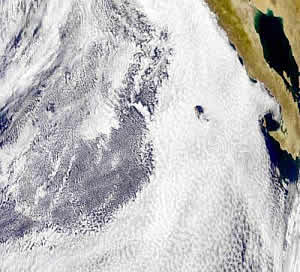 An unique cloud patterns over the Pacific Ocean of the coast of Baja California. Credit: NASA

VIRGINIA KEY, Florida -- The role of clouds in climate change has been a major question for decades. As the earth warms under increasing greenhouse gases, it is not known whether clouds will dissipate, letting in more of the sun's heat energy and making the earth warm even faster, or whether cloud cover will increase, blocking the Sun's rays and actually slowing down global warming.

In a study published in the July 24 issue of Science, researchers Amy Clement and Robert Burgman from the University of Miami's Rosenstiel School of Marine and Atmospheric Science and Joel Norris from Scripps Institution of Oceanography at UC San Diego begin to unravel this mystery. Using observational data collected over the last 50 years and complex climate models, the team has established that low-level stratiform clouds appear to dissipate as the ocean warms, indicating that changes in these clouds may enhance the warming of the planet.

Because of inconsistencies in historical observations, trends in cloudiness have been difficult to identify. The team broke through this cloud conundrum by removing errors from cloud records and using multiple data sources for the northeast Pacific Ocean, one of the most well-studied areas of low-level stratiform clouds in the world. The result of their analysis was a surprising degree of agreement between two multi-decade datasets that were not only independent of each other, but that employed fundamentally different measurement methods. One set consisted of collected visual observations from ships over the last 50 years, and the other was based on data collected from weather satellites.

"The agreement we found between the surface-based observations and the satellite data was almost shocking," said Clement, a professor of meteorology and physical oceanography at the University of Miami, and winner of the American Geophysical Union's 2007 Macelwane Award for her groundbreaking work on climate change. "These are subtle changes that take place over decades. It is extremely encouraging that a satellite passing miles above the earth would document the same thing as sailors looking up at a cloudy sky from the deck of a ship."

What was not so encouraging, however, was the fact that most of the state-of-the-art climate models from modeling centers around the world do not reproduce this cloud behavior. Only one, the Hadley Centre model from the U.K. Met Office, was able to reproduce the observations. "We have a long way to go in getting the models right, but the Hadley Centre model results can help point us in the right direction," said co-author Burgman, a research scientist at the University of Miami.

Together, the observations and the Hadley Centre model results provide evidence that low-level stratiform clouds, which currently shield the earth from the sun's radiation, may dissipate in warming climates, allowing the oceans to further heat up, which would then cause more cloud dissipation.

"This is somewhat of a vicious cycle potentially exacerbating global warming," said Clement. "But these findings provide a new way of looking at clouds changes. This can help to improve the simulation of clouds in climate models, which will lead to more accurate projections of future climate changes. "

One key finding in the study is that it is not the warming of the ocean alone that reduces cloudiness -- a weakening of the trade winds also appears to play a critical role. All models predict a warming ocean, but if they don't have the correct relationship between clouds and atmospheric circulation, they won't produce a realistic cloud response.

"I am optimistic that there will be major progress in understanding global cloud changes during the next several years," said Norris. "The representation of clouds in models is improving, and observational records are being reprocessed to remove spurious variability associated with satellite changes and other problems."