Research Vessel Polarstern At North Pole; 'Not More Interesting Than Other Places In The Arctic' 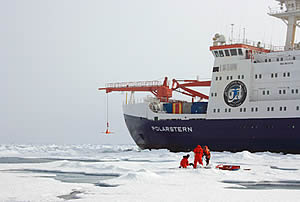 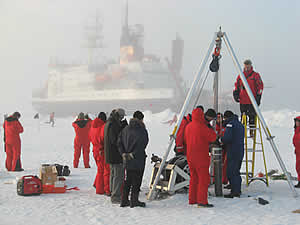 A typical ice station: Polarstern ties up at a big ice floe, which is than investigated by scientists from diverse disciplines. Photo: Karel Bakker 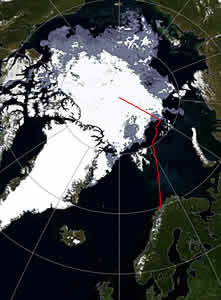 Route of the Polarstern towards the North Pole. Graphic: Lars Kaleschke, KlimaCampus, University of Hamburg

North Pole -- On August 22, 2011, at exactly 9.42 a.m., the research icebreaker Polarstern of the Alfred Wegener Institute for Polar and Marine Research in the Helmholtz Association reached the North Pole. The aim of the current expedition is to document changes in the far north. The researchers on board are conducting an extensive investigation program in the water, ice, and air at the northernmost point on the Earth. The little sea ice cover makes the route via the pole to the investigation area in the Canadian Arctic possible.

Sea ice not only plays a role in the selection of the route, but is above all a major research focal point. How thick is the ice and how old? To what extent has it been deformed by pressure â is there snow or puddles of melting water on it? Satellite measurements supply some ice information, but measurements are still required on site to be able to interpret these data correctly. Light energy causes the ice to melt and heats up the water in the summer months. The warming of the Arctic and the related changes in heat and gas exchange processes between the ocean, sea ice, and atmosphere are the paramount focus of the investigations. The oceanic currents that exchange water masses with the Atlantic and the Pacific are also undergoing change. Redistribution of the freshwater input from rivers into the Arctic Ocean is one of the factors that influence these oceanic currents.

Light is the source of energy for tiny algae that live in and under the ice and form the basis of the food web in the Arctic Ocean. Biologists classify species and determine the number of algae as well as the small and larger animals that feed on them. The researchers follow the path taken by the organisms from the water surface to the seafloor, where the remains end up as organic substance at a depth of thousands of meters after the organisms die.

These deposits on the seafloor permit conclusions to be drawn on how living conditions were in the course of the Earth's history. After all, the sediments and the animal and plant remains they contain are up to several million years old. Following the expedition, sediment cores will be analyzed in the laboratory. To improve the models of the Earth's climate history, chemists, physicists and oceanographers additionally examine the environmental conditions in the present-day oceans. They draw conclusions on how fast organic substance is transformed and relocated as a result of altered current conditions.

All 55 scientists and technicians from six countries on board the Polarstern have a common goal: studying the changes in the Arctic. This is also reflected in the name of the expedition "TransArc â Trans-Arctic survey of the Arctic Ocean in transition". The researchers have been investigating their questions jointly with the 43 crew members since the Polarstern left the port of TromsÃ¸ (Norway) on 5 August. The first ice floes appeared on 8 August. Since 9 August the Polarstern has been sailing through dense pack ice on the route along 60Â° East in temperatures of around 0Â° C. At first it was predominantly one-year-old sea ice, now older and consequently thicker ice floes appear.

"From a scientific point of view the North Pole is not more interesting than other places in the Arctic," reports Prof. Ursula Schauer from on board the Polarstern. The oceanographer at the Alfred Wegener Institute for Polar and Marine Research in the Helmholtz Association is the chief scientist of the expedition. "The expected changes are rather minor here. However, the northern part of the Canadian sector of the Arctic still numbers among the least researched regions on the globe because of the dense pack ice."

Schauer was in the central Arctic the last time in 2007 and is now experiencing a similarly small ice cover as the year that went down in the annals as the one with the lowest extent of sea ice since the beginning of satellite measurements in 1979. Initial measurements of the ice thickness confirm this: in 2011 as well as in 2007 the most frequently occurring ice thickness was 0.9 metres. As a comparison, the most frequently measured ice thickness in 2001 was around 2 metres. In that year the extent of the ice cover at the end of the melting period corresponded roughly to the long-term mean.

The Polarstern is at the North Pole for the third time in its history. On September 7, 1991, it was one of the first two conventionally driven ships to sail there, along with the Swedish research icebreaker Oden. Almost exactly ten years later, on 6 September 2001, it carried out a joint expedition at the North Pole together with the American research icebreaker Healy.

After the investigations at the North Pole and subsequently in the Canadian Basin the vessel will head for the Siberian Sea. The researchers want to study the oceanic circulation from the deep sea to the shallow shelf seas and habitats from the ice edge to the ice-free ocean. The Polarstern is expected to return to its homeport of Bremerhaven on 7 October.