Study: Seeping Arctic Methane Has Serious Implications For Florida Coastline; 'It May Not Be There For Your Grandchildren'

Researchers Probe Transmission Of Human Pathogen To Coral Reefs; 'Triple Jumps Like This Are Rare' 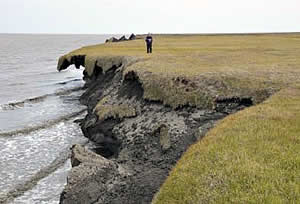 A study says parts of the Alaska coastline is eroding by up to 45 feet annually from declining sea ice, warming seawater and increased wave activity.

BOULDER, Colorado -- The northern coastline of Alaska midway between Point Barrow and Prudhoe Bay is eroding by up to one-third the length of a football field annually because of a "triple whammy" of declining sea ice, warming seawater and increased wave activity, according to new study led by the University of Colorado at Boulder.

The conditions have led to the steady retreat of 30 to 45 feet a year of the 12-foot-high bluffs -- frozen blocks of silt and peat containing 50 to 80 percent ice -- which are toppled into the Beaufort Sea during the summer months by a combination of large waves pounding the shoreline and warm seawater melting the base of the bluffs, said CU-Boulder Associate Professor Robert Anderson, a co-author on the study. Once the blocks have fallen, the coastal seawater melts them in a matter of days, sweeping the silty material out to sea.

Anderson, along with collaborators Cameron Wobus of Stratus Consulting and Irina Overeem of CU's Institute of Arctic and Alpine Research, or INSTAAR, each presented results from components of their study at the annual meeting of the American Geophysical Union in San Francisco held Dec. 14-18.

The problem is caused by several factors, including increased erosion along the Alaskan coastline due to longer ice-free summer conditions and warmer seawater bathing the coast, Anderson said. The third potential factor is that the longer the sea ice is detached from the coastline, the further out to sea the sea-ice edge will be. This open-ocean distance between the sea ice and the shore, known as the "fetch," increases both the energy of waves crashing into the coast and the height to which warm seawater can come into contact with the frozen bluffs, said Anderson.

"What we are seeing now is a triple whammy effect," said Anderson. "Since the summer Arctic sea ice cover continues to decline and Arctic air and sea temperatures continue to rise, we really don't see any prospect for this process ending."

In addition to Wobus and Overeem, co-authors on the studies include Gary Clow and Frank Urban of the U.S. Geological Survey in Lakewood, Colo., and Tim Stanton of the Naval Postgraduate School in Monterey, Calif.

The shoreline bluffs are made up of contiguous, polygon-shaped blocks, primarily made of permafrost and each roughly 70 to 100 feet across, he said. Ice "wedges" created by seeping summer surface water that annually freezes and thaws are driven deeper and deeper into the cracks between individual blocks each year. The blocks closest to the sea are undermined as warm seawater melts their base, and eventually split apart from neighboring blocks and topple during stormy conditions, said Anderson.

The researchers used a variety of instruments and methods in the study to examine the dynamic transition between the land and the sea, including time-lapse photography of shoreline erosion, global positioning systems (GPS), meteorological measurements including temperature and wind speed, and sediment analyses of the coastal bluffs. Offshore measurements included sea-ice distribution, ocean floor depth, sea-surface temperatures and wave dynamics, said Anderson, also a fellow at INSTAAR.

The time-lapse images were taken with four tripod mounted "game cameras" often used by hunters and wildlife biologists and which were set up parallel to the shoreline. The cameras snapped pictures every six hours during the 24-hour summer daylight months to track the effects of the waves on the coastline, said Anderson.

"Once one of these blocks topples, the process continues on to the next block," Anderson said. "These images are very powerful, because they pick up activity during severe storms when we aren't there to watch." The images also illustrate the steady melting along the water's edge that helps to undermine the bluffs even in the absence of storm activity.

The research team also deployed four submerged ocean buoys attached to metal sleds with sensors to measure the wave activity at different depths in the shallow coastal waters, comparing wave power with the shoreline fetch. The team attached temperature sensors to the buoy mooring lines to monitor seawater temperatures, which have been warming in recent summers due to increased solar radiation, he said.

When the sea ice is further from the shore, currents from the Beaufort and Chukchi seas transport warmer water to the coastline, said Anderson. While the temperature hovers around 45 degrees during the summer months, the shallow coastal water warmed to as much as 59 degrees during the 2007 field season -- the same year the largest loss of summer Arctic sea was recorded, he said.

As the ice wedges cut down through the polygon blocks, the surface soil above them -- which thaws each summer -- is pushed up slightly, forming small ridges that eventually surround each polygon, said Anderson. Small ponds form above individual polygons during the summer months as the surface ice and snow melts, providing habitat for migrating birds that feed and breed along the Beaufort Sea coastline.

"This is an important habitat for birds and other wildlife," said Anderson. "One of the concerns we have is that some larger ponds and lakes located slightly further inland may begin draining into the sea as the shoreline continues to recede."

While there are no towns adjacent to the specific study area, coastal erosion threatens abandoned military and petroleum infrastructure, he said. Coastal erosion occurs at similar sites elsewhere along Alaska's coastline. Bank stabilization measures using sandbags, for example, have been undertaken at the Alaskan town of Kaktovik on the Beaufort Sea in an attempt to slow the problem.

According to a 2009 CU-Boulder study, Arctic sea ice during the annual September minimum is now declining at a rate of 11.2 percent per decade. Only 19 percent of the ice cover was more than two years old -- the least ever recorded in the satellite record and far below the 1981-2000 summer average of 48 percent.