Research: Long-Distance Larvae Speed To New Undersea Vent Homes; 'We Got A Surprise' 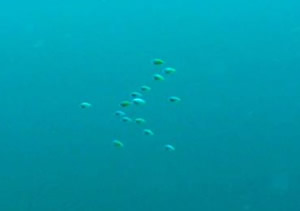 MIAMI, Florida -- The behavior of marine larvae is central to fully understanding and modeling the pelagic (open ocean) stage for many coastal organisms. For the first time, a numerical study conducted by the University of Miami (UM) incorporates horizontal larval fish navigation skills into realistic 3D flow fields, creating a powerful tool that spells out how larvae use environmental cues to find their way back to the reef after being out on the open ocean. The new model uses reliable larval swimming speeds and vertical migration, known life history traits and spawning time to create realistic scenarios that can be studied in detail.

In an article entitled: "Orientation behavior in fish larvae: A missing piece to Hjort's critical period hypothesis" that appears in the latest edition of the Journal of Theoretical Biology, scientists Erica Staaterman, Claire Paris* and Judith Helgers demonstrate that despite very low swimming speeds -- approximately a few centimeters per second -- orientation behavior during early stages is critical to bringing larvae back to the juvenile habitat. The research team shows that baby reef-fish must possess, as early as possible, the ability to sense cues radiating from the habitat that help them to navigate and survive the pelagic phase.

The team used Hjort's "critical period" hypothesis, which says that fish recruitment variability is driven by the fate of the earliest larval stages, and that food and "aberrant drift" are the main factors contributing to the survivorship during this early phase. According to this hypothesis, the proportion of survivors during this "critical" larval phase is carried over throughout the entire life history of the fish's population.

"Orientation during the "critical period" appears to have remarkable demographic consequences," said UM Applied Marine Physics Professor Paris. "Larvae need to orient themselves soon after hatching to increase their chance to find any reef or to come back to their home reef. This notion of 'larval homing behavior' is a new concept, but it makes sense when compared to other essential larval developmental traits such as first feeding and swimming. If early fish larvae can sense their way home, we were certainly missing an important component in current bio-physical models that would change predictions of marine population connectivity."

"Using this model we can add to Hjorts' hypothesis that 'behavior' is a main factor contributing to the survivorship of the larvae, as well," said Staaterman, a Ph.D. student at UM. "We have discovered that recruitment of reef-fish is linked to signals perceived by the pelagic larvae; if the signals disappear or weaken, larvae can get lost. Therefore, the health of the coral reef and its cues is not only critical to the adult reef-fishes, but it is also essential to the survivorship of their pelagic larvae."

This study also shows the importance of the health of the habitat, even in complex coastal circulation with eddies and counter-currents: The stronger the cue information radiating from the surrounding habitat, the higher the survival rate of the larvae.

The flexible numerical tool that was developed through this study will allow scientists to set up hypotheses about both the nature of the cues and the larval behavior of a wide variety of marine species. This knowledge will allow us to better understand the enigmatic ecological "black box" of the pelagic larval phase, and help communities to better manage marine resources.

"These kind of studies, where the paths of millions of fish larvae are simulated in a model ocean, are really only feasible with the newest generation of numerical models," said Helgers, a computer scientist who contributed to the model algorithm which is designed to answer questions on the interaction of larvae with ocean currents. "The model we have built is fast and reliable, which allows us to perform the complex computations required to track the larvae in a high resolution model ocean."

"The outcomes of this study should serve to re-focus research on basic understanding of what larvae are capable of sensing, how they use their capabilities in the pelagic environment, and finally on the sequential importance of navigational cues needed for survival," added Paris.