Scientists: Study Shows How The Zebrafish Gets His Stripe; 'A Classic Problem In Developmental Biology'

Scientists Warn Of Damage To Deep Seabed; 'It Is A Very Serious Problem' 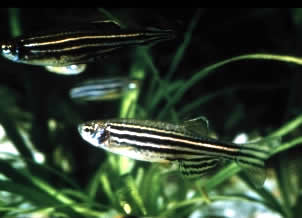 BATH, England -- Scientists have discovered how the zebrafish (Danio rerio) develops one of its four stripes.

Their findings add to the growing list of tasks carried out by an important molecule that is involved in the arrangement of everything from nerve cells to reproductive cells in the developing embryo.

The research focused on a particular zebrafish mutant known as choker, which is distinctive because one of the four stripes running down its side is missing, and it has a dark collar around its neck instead.

Dark spots and stripes in fish, amphibians and reptiles are usually caused by a type of cell, known as a melanophore, which contains high quantities of the pigment melanin.

Using time-lapse photography, the team put together movies showing how the melanophores migrate in developing embryos of both the wild-type (naturally occurring) zebrafish and the choker mutant.

“It is as though someone has put up ‘keep off the grass’ signs in the wild-type zebrafish to keep the melanophores in separate paths (stripes),” said Dr Robert Kelsh from the University of Bath who led the study which was published in the journal Development.

“The melanophores stay on the footpath of the developing stripe in a very orderly fashion, but in choker it’s as though these signs have been knocked down, and the pigment cells run all over the grass between the footpaths.”

The breakthrough in understanding how this happens came with the discovery that a molecule, known as Sdf, appears to have some role in encouraging melanophore cell migration.

Sdf is a known cell migration guidance molecule, with roles including regulating the migration of neurones in the fish’s central nervous system and germ (reproductive) cells.

When researchers looked where the molecule was found, they could see that it appeared to line up in the same pattern as a third stripe in the wild-type zebrafish, and around the collar in choker mutants.

“The correlation of Sdf expression and melanophore pattern in wild-type and choker mutants embryos was so striking, it immediately suggested that Sdf plays a key role in dictating the pattern of at least this one stripe in zebrafish,” said Dr Kelsh.

To test the theory, researchers positioned a bead soaked in human Sdf onto the skin of zebrafish embryo. Even in the choker mutant, this bead attracted the melanophores to where it was implanted.

The researchers also used a technique known as protein knockdown to reduce the amount of Sdf produced in the embryo, and were able to partially remove the third stripe in wild types and to reduce colouring in the neck of the choker mutant.

“Sdf is really important, not just for pigmentation but also the development of neurons and germ cells,” said Dr Kelsh.

“Pigment pattern formation is a classic problem in developmental biology and whilst there have been lots of mathematical theories on how the fish make different patterns, the underlying genetics have been unclear.

“Similarities between animals mean that we can take what we learn about the development of these simple models, and begin applying them to more complex systems, such as humans.”