Researchers: Wilkins Ice Shelf Hanging By Its Last Thread; 'It Is Going More Quickly Than We Guessed'

Scientists: Speed Matters For Ice-shelf Breaking; 'there Is So Much Variability' 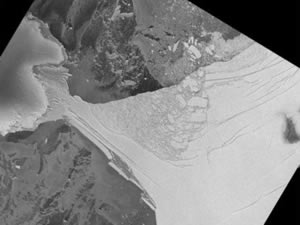 PARIS, France -- The Wilkins Ice Shelf is experiencing further disintegration that is threatening the collapse of the ice bridge connecting the shelf to Charcot Island. Since the connection to the island in the image centre helps to stabilise the ice shelf, it is likely the break-up of the bridge will put the remainder of the ice shelf at risk.

This animation, comprised of images acquired by Envisat's Advanced Synthetic Aperture Radar (ASAR) between 30 May and 9 July 2008, shows the break-up event which began on the east (right) rather than the on west (left) like the previous event that occurred last month. By 8 July, a fracture that could open the ice bridge was visible.

According to the image acquired on 7 July 2008, Dr Matthias Braun from the Center for Remote Sensing of Land Surfaces at Bonn University estimates the area lost on the Wilkins Ice Shelf during this break-up event is about 1350 kmÂ² with a rough estimate of 500 to 700 kmÂ² in addition being lost if the bridge to Charcot Island collapses.

This break-up is puzzling to scientists because it has occurred in the Southern Hemispheric winter and does not have characteristics similar to two earlier events that occurred in 2008, which were comparable to the break-up of the Larsen-A and -B ice shelves.

"The scale of rifting in the newly-removed areas seems larger, and the pieces are moving out as large bergs and not toppled, finely-divided ice melange," said Ted Scambos from the National Snow and Ice Data Center who uses ASAR images to track the area.

"The persistently low sea ice cover in the area and data from some interesting sources, electronic seal hats [caps worn by seals that provide temperature, depth and position data] seems to suggest that warm water beneath the halocline may be reaching the underside of the Wilkins Ice Shelf and thinning it rapidly - and perhaps reaching the surface, or at least mixing with surface waters."

Prof. David Vaughan of the British Antarctic Survey (BAS) said: "Wilkins Ice Shelf is the most recent in a long, and growing, list of ice shelves on the Antarctic Peninsula that are responding to the rapid warming that has occurred in this area over the last fifty years.

"Current events are showing that we were being too conservative, when we made the prediction in the early 1990s that Wilkins Ice Shelf would be lost within thirty years - the truth is it is going more quickly than we guessed."

The Wilkins Ice Shelf, a broad plate of floating ice south of South America on the Antarctic Peninsula that is connected to Charcot and Latady Islands, had been stable for most of the last century before it began retreating in the 1990s.

By studying ESA ERS SAR satellite images since the 1990s, Braun and his colleague Dr Angelika Humbert from the Institute of Geophysics, MÃ¼nster University, have found the Wilkins Ice Shelf has break-up events with loss of large areas rather than underlying ordinary, continuous calving.

Braun and Humbert are monitoring the ice sheet daily via Envisat acquisitions as part of their contribution to the International Polar Year (IPY) 2007-2008, a large worldwide science programme focused on the Arctic and Antarctic.

Satellite data are essential for observing polar regions. Envisat's ASAR instrument is able to produce high-quality images, even through clouds and darkness. Therefore, it is particularly suited to acquire images over Antarctica during the local winter period where hours of daylight are limited and cloud cover is quite frequent.

"ESA provides daily ASAR images that are easily accessible to scientists. It is particularly rewarding for us to see that the Envisat data are essential for scientists to quickly and easily observe these ice-shelf phenomena – a luxury that was not available to the scientific community a few years ago," ESA Envisat Mission Manager Henri Laur said.

"ESA is committed to continue monitoring the polar areas with Envisat and in the future with the GMES Sentinel-1 satellite."

In an effort to ensure as much SAR data as possible is made available to scientists and polar region projects during IPY, ESA is coordinating with other space agencies worldwide, such as Japan's JAXA, the Canadian Space Agency and the German and Italian space agencies, to acquire additional SAR data over these areas with their own satellites.