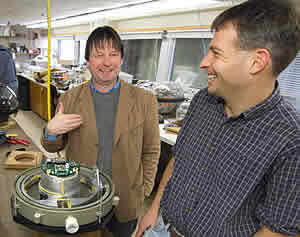 WOOD HOLE, Massachusetts -- damage Portland, Tacoma, Seattle, and Victoria, British Columbia, and generate a large tsunami. Yet there are currently no instruments installed offshore, directly above the fault, for measuring the strain that is currently building up along the fault.

But a recent $1 million grant from the W. M. Keck Foundation to scientists at the Woods Hole Oceanographic Institution (WHOI) will change that. An interdisciplinary project led by WHOI geologist Jeff McGuire, an expert in global earthquake seismology and geodesy, and John Collins, director of WHOI's Ocean Bottom Seismometer Lab, will build and install the first seafloor geodesy observatory above the expected rupture zone of the next great Cascadia earthquake.

"I think all scientists agree there will be another magnitude 9 earthquake off Oregon and Washington," said McGuire. "What we're doing is trying to understand what that will look like. Information that is critically important for modeling how much the fault will slip â and hence how much the ground will shake â and for predicting the maximum height of the tsunami that could be generated."

"We are immensely grateful for the support from the Keck Foundation, which has a long track record of supporting important research and technology innovations to understand the Earth and its systems for the benefit of society," said WHOI President and Director Susan Avery. "The real-time data flowing from the fault on the seafloor will not only advance our understanding of earthquakes but can help city planners and emergency response managers."

The Cascadia subduction zone is a very long sloping fault that stretches from mid-Vancouver Island to Northern California. It separates the Juan de Fuca and North American plates. For many years, according to conventional wisdom, the Cascadia subduction zone slipped without earthquakes. But in the last 30 years, geologists have uncovered sedimentary records as well as historical records in Japan showing that "indeed, the fault repeatedly had these huge earthquakes with big tsunamis," said McGuire.

Cascadia's last big event occurred in 1700 and was likely very similar to the March 2011 Japanese earthquake â a magnitude 9 quake and tsunami that traveled all the way across the Pacific. This similarity is foreboding for earthquake scientists, as a key scientific lesson of the Japanese earthquake has been that the standard datasets collected onshore are completely inadequate for characterizing the upcoming ruptures on an offshore subduction zone thrust fault.

One key limitation in the seismic hazard estimation for subduction zones is the use of geodetic data recorded onshore â primarily GPS data â to determine the extent to which offshore faults are locked and building up strain for the next big earthquake. GPS can detect surface motion to unprecedented precision â a fraction of a millimeter per year â but land-based GPS is too far away from offshore faults to be sensitive enough to that motion.

"So you have to have instruments out there to be really sensitive to it," said McGuire. "We know the fault is locked around the coast but we don't know how far offshore it's locked. So one of our goals is to determine if the fault really is locked all the way to the trench or not. One reason that's important is for understanding what the next tsunami will be like. The March Japan earthquake had such a big tsunami because most of the fault motion was really shallow and close to the seafloor. So figuring out exactly where the locking starts at the shallow end of the fault is one of our primary goals."

To do this, McGuire and Collins will install tiltmeters at a location approximately 4 kilometers above the Cascadia subduction zone thrust interface. "Tiltmeters are standard instruments on land â most volcano observatories have them," said McGuire. "These instruments are very, very sensitive to tiny little deformations that occur in the rock," adds Collins. "The movements can be subtle. They can be slow. Something a seismometer is not sensitive to."

The tiltmeters will be located within a 300 meter-deep borehole, a study site established by the Integrated Ocean Drilling Program, and will take advantage of an existing seafloor cable infrastructure â NEPTUNE Canada â enabling immediate access to the data collected by the instrument. The instrument array should be installed and returning data by summer 2013.

If such a data stream had been available in real time from the Japanese subduction zone in the days preceding the March 11 quake, the scientific community might have known that the potential for a large earthquake was very high because the fault was already slipping slowly.

McGuire says the co-location of the instruments in the IODP borehole, where scientists study the fluid pressure in the Earth, will also enable the scientists to collaborate across disciplines in new ways.

"Part of the reason we're installing a tiltmeter in a borehole is because of interesting signals collected in boreholes in the past," he said. Signals that provide clues to better understanding of earthquakes. "It all feeds back into understanding the fault system â how the stress changes over time in the fault system."