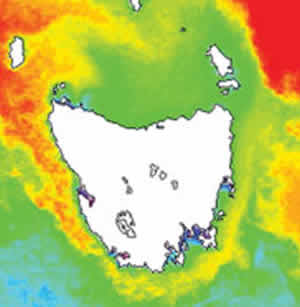 CANBERRA, Australia -- While land farmers have used seasonal forecasting for nearly a decade, marine farmers in south-east Australia have sought the technology for a region identified as a climate change hotspot, with rates of ocean warming up to four times the global average.

"Marine farms in this region, particularly south-east Tasmania, want to use all available resources to ensure proper planning and response measures are in place to combat against the warmer summer months which can have adverse effects on fish performance," Dr Hobday said.

CSIRO's Dr Alistair Hobday said."While adaptation to long-term change is seen as important by the sector, dealing with climate variability exacerbated by ongoing climate change is a more immediate need."

"Our objective is to provide marine farmers with forecasts at their salmon farming sites up to four months ahead. This will enable management to consider a number of responses that will help maintain industry profitability in an uncertain environment. It should also help this valuable industry to come to terms with long-term climate change and begin formulating adaptation strategies."

The work will be detailed in Melbourne today during the CCRSPI (National Climate Change Research Strategy for Primary Industries) Conference 2011.

The trials began in September last year, with forecasts provided to Tasmania's four major salmon farmers each month. Historical data back to 1990 and a seasonal ocean-atmosphere model developed by the Bureau of Meteorology are being used in the predictions.

An associated cost-benefit analysis of the predictions applied to each site also will be generated. The project involves trialling advanced statistical techniques to determine how well scientists can resolve the variations at the different time scales.

He said validation of the forecasts using historical data is improving their accuracy and illustrating the likely benefits to the industry.