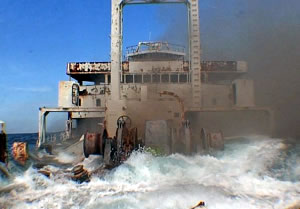 A remote onboard camera records the Vandenberg after cutting charges were detonated. credit Steve Panariello and Andy Newman 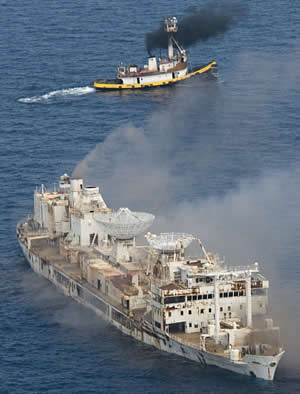 A tug maneuvers around the Vandenberg as it begins to sink. credit Andy Newman/Florida Keys News Bureau

The installation of mooring buoys was completed Thursday, according to Kent Edwards, Lower Keys regional manager of the Florida Keys National Marine Sanctuary.

However, project divers are working Friday to secure the vessel's two iconic tracking antenna dishes that were torn off their pedestals, but remained tethered to the ship by stabilizing cables, when the ship was scuttled Wednesday.

The 523-foot-long Vandenberg is situated about seven miles south of Key West. The bottom of the ship's hull rests on sand in depths that average 150 feet. But the ship is so massive that the superstructure begins about 45 feet below the surface.

It took just a minute and 54 seconds to sink the Vandenberg after demolition experts triggered a series of explosives that lined both sides of the ship's bilge area below the waterline.

"It was a pretty cool experience," said Joe Weatherby, who organized Artificial Reefs of the Keys in 1996 and chose the Vandenberg from about 400 decommissioned military ships rusting away in "Ghost Fleets" across the country. "We waited for it a real long time.

"We think this is really going to be a home run for both our environment and our economy down here," he said. "This is good business and at the same time we're taking (recreational dive and angling) pressure off our natural coral reefs."

Weatherby said it should not take long for the Vandenberg to attract fish.

The ship is now the second largest vessel in the world ever purposely sunk to become an artificial reef. The sinking also complete the Florida Keys Shipwreck Trail, a series of intentionally sunk vessels that begins off Key Largo with a former Navy landing ship dock, the Spiegel Grove, and ends with the Vandenberg.

The ship first saw duty as a U.S. Army troop transport named the General Harry Taylor. It became the Gen. Hoyt S. Vandenberg in 1963 and tracked the U.S. space program's launches off Cape Canaveral. It also served in the Pacific monitoring U.S. defense missile test launches and eavesdropped on Russian missile launches during the Cold War.

The Vandenberg was formally retired in 1983 and was transferred to the James River Naval Reserve Fleet.

Several of the ship's veterans witnessed the scuttling.

"I am planning to come back in a few weeks with a group of guys [fellow Vandy veterans] who could not be here today, so we can all dive it," said Charles Patrick Sherlock, 64, a Cocoa Beach, Fla., resident who worked as a telemetry technician from 1976 to '78.

More information on the Vandenberg as well as accommodations details in the Keys are available on the Florida Keys tourism council's Web site at www.fla-keys.com.